“This is an independent matter.”

Feeling lucky? Jerry (Jason Gedrick) does, winning a ticket to the World Series of Poker and a date with card dealer Naomi (Weronika Rosati) in this week’s episode. Lonnie (Ian Hart) has a less successful afternoon.

The hapless Foray tells his friends at breakfast that he’s spotted a potential claim in race three, a gray filly who reminds him of Mon Gateau — like the Foray Stable winner, Lonnie thinks Niagara’s Fall is better than the company she’s keeping. He also tells the gang that he’s claiming her alone, which makes Marcus (Kevin Dunn) scoff and Renzo (Ritchie Coster) concerned. There are so many details to get right, he reminds Lonnie — if the horse’s name is even misspelled, for instance, the claim won’t be valid.

There are money matters, too. “Sales tax! Don’t forget it,” Renzo calls after “Mr. Go-It-Alone” as he heads to the racing office to put in his claim slip for the filly. We went over claiming game basics earlier in the season, when Renzo first attempted to claim Mon Gateau, but this episode delves more into the details of ownership — such as, once the starting gate opens, whoever enters a claiming slip on a horse owns that horse. There’s no going back, no matter what happens in a race. (The one exception, in some states, including California, is if a horse is euthanized on track.)

Tracks ensure connections follow that deceptively simple rule by requiring every owner and trainer to maintain owners’ and horsemen’s accounts in their jurisdictions. In California, these accounts are overseen by the Paymasters of Purses, and it is through these accounts that all purse monies are paid and claims processed. (Other transactions, such as fines levied by the racing board and payments made to various organizations are also handled through track accounts and managed by the Paymasters.) Claims can only be entered, and accepted, if the claiming price (plus any taxes and fees) are on deposit in an owners’ account.

Lonnie’s claim stands — but there’s a moment when it looks as though his new horse might not for much longer.

“She owes you one, Leon, getting her pulled up so quick.”

But the news is not that bad! Niagara’s Fall, looking for all the world like she’s going to win, stumbles in the stretch and apprentice rider Leon Michaeux (Tom Payne) has the presence of mind to quickly pull the filly up. He jumps off and holds the filly still as the track veterinarian, along with Escalante and Lonnie, run over to find out what’s happened. Dr. Jo (Jill Hennessy) commends Leon for his actions — “She owes you one, Leon.”

How a jockey handles a horse injured during a race can make all the difference in that horse’s prognosis — stop a horse after a bad step, and the animal may not only live, it might race again. In 1999, Chris Antley dramatically illustrated what a difference a rider can make when Kentucky Derby and Preakness winner Charismatic suffered a fracture in the final furlong of the Belmont Stakes. The jockey leapt from his saddle and held Charismatic’s leg, broken in two places, in his hands until a veterinarian was able to apply a splint. Charismatic underwent surgery the following day — his racing career over, but his life saved.

Back in the barn, Jo exams the filly’s right front leg and tells Lonnie that she won’t race again. Niagara’s Fall ruptured her flexor tendon — an injury otherwise known as a bowed tendon. “You got yourself a broodmare now,” says the vet.

Find out more
Review of Three Strides Before the Wire: The story of Chris Antley and Charismatic
Pedigree Basics: Terminology

“The horse you claimed has nothing to do with the Three Stooges.”

Looking for clues to the day’s events later, Lonnie declares to Marcus and Renzo that he should have known the claim wasn’t good because of the horse’s name — it was too reminiscent of a Three Stooges routine. Racetrackers and horseplayers are a superstitious bunch, but Marcus can’t help but knock down Lonnie’s theory. For one thing, the filly’s name is “Niagara’s Fall,” not “Niagara Falls.”

Find out more
Track Superstitions: A Historical Look at the Role of “Luck”
Slowly I Turned (Wikipedia)

After several rough weeks, Ronnie (Gary Stevens) is trying to get his life (and career) back in order, attending AA meetings and talking to trainer Walter Smith (Nick Nolte) about getting the mount back on Gettin’up Morning. Smith tells the jockey he plans to replace Rosie and that Ronnie can have the call on the horse, so long as he’s fit and sober. Ronnie pledges he’ll be both, but despite his desire to return to racing and the promise of such a talented ride, he can’t resist the lure of painkillers when he’s home alone later that night. 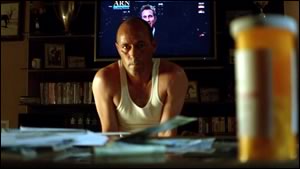 If Stevens doesn’t get an Emmy nomination for “Luck,” it’ll be a shame, because the Hall of Fame jockey turned actor is doing incredible work depicting a rider’s struggle with addiction. Unfortunately, it’s a story he’s seen up close — Stevens was a friend of Chris Antley, and witnessed that rider’s fight with drugs and alcohol before his death in 2000, and he also rode the same circuit as Patrick Valenzuela, a talented jockey whose career was frequently interrupted by addiction. Substance abuse is a familiar story in racing, but there are jockeys who overcome drug and alcohol problems and succeed at the game’s highest levels, such as Hall of Famer Jerry Bailey, currently an analyst for ESPN and ABC sports, and Garrett Gomez, now one of racing’s leading riders.

“We bought him at a livestock auction on his way to slaughter for $186.”
Possibly the only character on “Luck” having a better day than Jerry is Ace Bernstein (Dustin Hoffman), who visits the prison farm to which he gave so generously. Claire Lachay (Joan Allen) introduces him to one of the retired Thoroughbreds being cared for by the inmates, an older gelding, earner of more than half a million during his career. While many organizations exist to ensure that Thoroughbreds are safely retired from the racetrack, horses still sometimes end up in auctions where they can be purchased for slaughter. It may be years after the Thoroughbreds last raced, but groups such as the one Lachay represents on “Luck” work hard to rescue the racehorses they can from meeting that fate.

Find out more
Horses and Hope: From Auction to Adoption