“Can we get to the window please?” 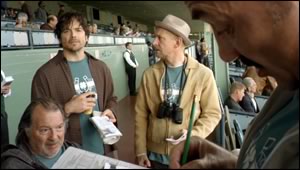 T-shirts for everyone! Mon Gateau, the claiming horse purchased by the four horseplayers in episode three, is making his first start for Foray Stable and Marcus (Kevin Dunn) is eager to get his bets in for the race. Because there’s no surer bet on “Luck” than your own horse (especially when it’s in trainer Turo Escalante’s barn), Marcus reels off a list of wagers with Mon Gateau — #7 — at the top, including a $10 trifecta (a bet on the first three finishers in a race) and a daily double (a wager that ties two races together). Jerry (Jason Gedrick) and Lonnie (Ian Hart) follow suit, with Jerry throwing in a “double wheel” that plays #7-all (meaning Jerry is picking #7 to finish first, and “all” to finish in the next position) and Lonnie playing a #7-all-all Pick 3 (Lonnie is singling Mon Gateau in the first leg of a wager that runs through three races, and playing all of the runners in each of the next two legs). The shorthand sounds more confusing than it is — learn the lingo and you too can sound as much like a railbird as a “Luck” character.

“The stewards have posted the inquiry sign.”
If nothing else, “Luck” is an education is all that can go wrong during a horse race. In previous episodes, we’ve seen a horse fatally injured, caught in traffic, left at the gate, and slashed by a flying shoe. In Mon Gateau’s latest start, he’s the source of trouble, ducking toward another horse in the stretch. Seconds after Mon Gateau crosses the finish line, as all the Forays but Jerry are celebrating, the stewards post the “Inquiry” sign on the toteboard. Tense moments pass before the race is declared official — with no change to the order of finish.

Somewhere in the grandstand, there’s a horseplayer ranting about the bad decision made by “three blind mice.” (Marcus has obviously been burned by stewards’ decisions in the past.) But not the Forays, not today!

An inquiry is a review of a race for possible infractions or interference. Inquiries may be initiated when stewards — the officials responsible for ensuring that every race is run fairly and certifying results — notice unusual activity during a race or a race participant (a jockey or a trainer) lodges an objection to a race result based on something that occurred during the running. Stewards are guided by rules that vary by jurisdiction and inquiry results can seem quite subjective to observers — bettors holding tickets on whichever horse does (or doesn’t) get “taken down” always have strong feelings on whether stewards made the right call or not. 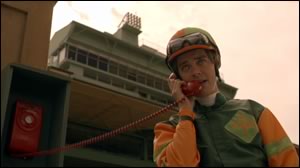 In the case of Mon Gateau, apprentice rider Leon Micheaux (Tom Payne) tells the stewards that the horse forgot to switch leads, which is why he moved to the inside and into the path of the other horse. The stewards determine that what happened didn’t affect the finish — “He was going backwards at the time of the incident,” one of the stewards says of the horse Mon Gateau bothered — and the Forays make their way to the winner’s circle.

Occasionally, the stewards don’t put up the inquiry sign even when something odd seems to happen during a race. Last weekend’s Las Virgenes Stakes at Santa Anita is an example of this: winner Eden’s Moon and runner-up Reneesgotzip made contact in the stretch. Although trainer Peter Miller objected to the finish, based on jockey Corey Nakatani alleging that Reneesgotzip was struck in the face with a whip, the stewards passed on reviewing the race.

“Here’s a star in the making!”
It’s the next day, and Gettin’up Morning is making his second start. He wins, but not without rider Rosie (Kerry Condon) disappointing trainer Walter Smith (Nick Nolte) when she gives him a couple taps of the whip in the stretch. The colt accelerates — he wins by six lengths, according to track announcer Trevor Denman — and sets a track record of 1:32.21 for a mile on the main track. That’s impressive!

The one-mile dirt track record at Santa Anita is currently held by Ruhlmann (according to Equibase) and by both Ruhlmann and Misremembered (according to Santa Anita). There’s a reasonable explanation for the uncertainty — Ruhlmann set a track record of 1:33 2/5 (or approximately 1:33.40) on March 5, 1989, Misremembered a record of 1:33.50 on March 6, 2011. In between those races, Santa Anita tore out the dirt track and replaced it with an all-weather synthetic surface from 2008-2010, and times went from usually being recorded in fifths to tenths, creating some ambiguity in comparing times from one era to another.

Whether Gettin’up Morning’s time is in fifths or tenths, though, doesn’t matter — he’s taken more than a second off the previous best time at the distance. “Track record â€¦ it’s goin’ get crazy now,” says Smith. No doubt — just look at the track publicist hustling to get the race replay up on the track website.

“You gotta teach them a race at a time what they need to know for the race that they’re in.”
Rosie and Smith make up later that night, as they sit outside Gettin’up Morning’s stall talking about what happened in the race. Smith is a patient, methodical horseman, and as he tells Rosie, what’s important is that the horse learns from each race. What’s unsaid is that it’s also important for Rosie to learn from the race. She’s hardly the first inexperienced jockey to wield the whip because of an anxious desire to win — rider Jeremy Rose was castigated for doing similar when he rode 2005 Preakness and Belmont Stakes winner Afleet Alex — and Smith wants her to trust herself as much as she trusts the horse. You can see in his face, though, that he’s wondering if he can trust her again — part of the craziness that’s sure to descend around Gettin’up Morning in coming weeks will be that of jockey agents jostling to get their riders named on such a talented animal. Joey Rathburn may find he has another reason to live.