“For a favor, to make the race go, I let him put your name in.”
Another week, another horse race. Which isn’t a bad thing! Even as “Luck” hits its stride mid-season with the human dramas driving the story, the races remain some of the most beautiful and thrilling moments in the show.

In episode five, it’s Pint of Plain’s turn to enter the starting gate. That’s a surprise to Ace Bernstein (Dustin Hoffman), who bought the Irish stakes winner for $2 million and his right-hand guy Gus Demetriou (Dennis Farina), whose name is actually on the owner’s license. After an unsatisfying call to Turo Escalante (John Ortiz), the pair surprise the trainer in his shedrow, demanding to know what the horse is doing in the race. “For a favor, to make the race go, I let [the racing secretary] put your name in,” Escalante tells Ace and Gus, assuring them that the horse is 90 percent likely to scratch — that is, be declared out of the race.

It’s not uncommon for racing secretaries to approach trainers about entering horses to help fill a race. The average field size in North America has been declining for years, hitting a low of 6.11 in 2010. It’s a problem that’s expected to become more acute due to a significant drop in the number of registered foals born in recent years and the pressure to keep up the number of race days, especially on a year-round racing circuit such as Southern California.

More horses entered in a race generally means more money wagered on that race — if Pint of Plain is scratched, for instance, reducing the race he’s entered in to four starters, that would eliminate show and trifecta wagering, costing the track thousands of dollars. No wonder the racing secretary was pressing Escalante for an entry.

Of course, there’s also the possibility that Escalante is looking to get a bet down, something Ace seizes on as the trainer’s more likely motivation. He doesn’t like Escalante’s odds that the horse will scratch, and he really doesn’t like that the apprentice jockey Leon Micheaux (Tom Payne) is named to ride. A deal is struck, and the bug is dumped with a $5000 payoff in favor of the best rider the trainer can get.

“Okay, Turo, good luck today.”
Guess Pint of Plain woke up 100 percent, because there he is in the shedrow, getting a pre-race vet check. First, the track veterinarian flips his lip to check his tattoo — every registered thoroughbred is assigned a unique number that is tattooed across the top gum — confirming she’s looking at the right horse, then she runs her hands over his legs, looking for any signs of heat or discomfort, and asks the groom to jog the horse a few yards, watching for any unevenness in gait. The pre-race exam by a track veterinarian on the morning of raceday is standard practice at US racetracks, done to ensure that every horse entered to run is racing sound. 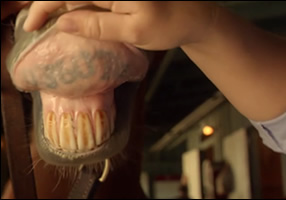 The tattoo is meant to be a guard against connections entering one horse (a ringer) in place of another. Not only is the number checked during the morning vet exam, it will be confirmed once again when the horse enters the paddock or saddling enclosure for that afternoon’s race. Ringers almost never happen these days (there are some great tales, though, in the game’s history, and as recently as 1990, a horse was entered as a ringer at the now-defunct Marshfield Fair in Massachusetts). In rare cases, other forms of deception may be attempted — the California Horse Racing Board recently sanctioned Paul Aguirre for altering a horse’s registration papers.

“Now pray he come out in one piece.”
Pint of Plain wins, but not without suffering a nasty gash on his right hind leg, inflicted when another horse in the race loses a shoe. That’s just one of the things that can go wrong in a race, although we usually hear about a lost shoe from the connections of the horse who actually experienced the mishap. On last year’s Kentucky Derby trail, Mucho Macho Man was a serial loser of shoes (Louisiana Derby and Preakness), which his trainer suspected was a factor in races in which the colt underperformed. One of the most notorious lost-shoe stories is that of 2008 Kentucky Derby and Preakness winner Big Brown. A heavy favorite to win the Belmont Stakes (and the Triple Crown), jockey Kent Desormeaux explained Big Brown’s incredibly poor last-place finish at Belmont Park as due to a hind shoe thrown at the start.

Losing a shoe doesn’t always mean losing a race — Cape Blanco defeated turf champion Gio Ponti in the 2011 Man o’ War Stakes at Belmont Park even though one of his front shoes came off.

“Tony, you mind altering your rounds?”
Going back to the day before, Escalante passed jockey agent Joey Rathburn (Richard Kind) the $5000 “kiss-off” money from Ace to replace Leon in a track bathroom, a transaction unwittingly witnessed by Tony, who’s scrounging for recyclables and uncashed tickets. Tony is a stooper, someone who searches for winning discarded betting tickets. It’s a practice that’s discouraged at most tracks and off-track betting outlets — uncashed tickets can add up to hundreds of thousands of dollars every year — because unclaimed winnings are retained by the bet-takers.

“Busybody dropped the dime on me to the racetrack bosses.”
Tracks may tolerate stoppers, but loansharks are another matter. Security guard Kagle (Peter Appel), who taunted Jerry (Jason Gedrick) before making refusing him a loan for that day’s Pick 6 share in episode one, reappears in episode five, fired from his job and desperate for a little financial aid. That storyline may have been partly influenced by real-life Santa Anita track executives. â€œIn the pilot, we have a crooked security guard, but we donâ€™t want people to think security are loan sharks,” director of special projects Pete Siberell told the Pasadena Weekly. “So we made it clear to Milch that thatâ€™s not something we tolerate, so the character gets fired by track management when they find out.”

“Don’t miss the Santa Margarita Stakes this Saturday.”
As Rathburn strides out of Santa Anita to meet Leon and give him the disappointing news that he’s off Pint of Plain, we get a clue to the show’s timeline in the sign over the track’s main entrance, which reminds visitors that the Santa Margarita is running that weekend. The Santa Margarita is a Grade 1 race for fillies and mares scheduled in early March. In the past decade, the race has been won by two distaffers who would be named Horse of the Year during their careers — Azeri in 2002, and Zenyatta in 2010.

Early spring is an exciting time of year for anyone with a talented 3-year-old in the barn. We don’t see trainer Walter Smith (Nick Nolte) or Getting’up Morning in this episode, but with the Kentucky Derby, and the rest of the Triple Crown, only weeks away, his thrilling debut win last week hints at classic race potential.