“Marcel’s going to be your valet.” 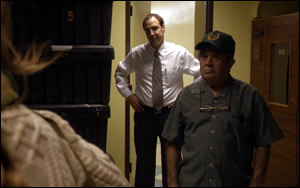 Rosie’s back! And trainer Walter Smith (Nick Nolte) seems pretty pleased to see the pretty rider in his shedrow once again. Exiled to Portland Meadows in episode two, Rosie (Kerry Condon) returns to Santa Anita to ride Gettin’up Morning in his much anticipated debut. Escorted into the women’s locker room, she’s introduced to Marcel, her valet — the apparently mute fellow who will manage her silks, saddle, and gear — and given a locker next to another marked with the name “Julie.” That’s a nice little shout-out to Hall of Fame jockey Julie Krone, the winningest female jockey in racing history (and the wife of Daily Racing Form columnist Jay Hovdey, credited with writing this week’s episode). Krone, the first woman to win a Triple Crown race, retired permanently in 2004 with 3,704 wins and earnings of more than $90 million. It’s the kind of career to which Rosie surely aspires, and if she’s lucky, into which Gettin’up Morning could help launch her.

“I wouldn’t get too far back.”
Smith gives Rosie a leg up into the saddle in the Santa Anita paddock, and the two exchange a bit of strategy. “So, come from off it?,” Rosie asks the trainer, and he tells her yes, but that “I wouldn’t get too far back.” The cryptic chat refers to the likely pace of a six-furlong race at Santa Anita. In a sprint, being near the lead (the pacesetter) from the start is usually essential for a horse to be in contention when the field turns into the stretch.

Trainers often give jockeys direction in the paddock — we saw Turo Escalante (John Ortiz) tell bug boy Leon (Tom Payne) how he wanted Mon Gateau ridden back in episode two — based on such things as a horse’s quirks or the competition. Once on the racetrack, though, all the well-intentioned instruction in the world can get tossed at the starting gate.

“Like he got shot from a cannon.”
Here’s the how trip notes in the chart for Gettin’up Morning’s first race might read:

“GETTINUP MORNING stumbled out of the gate spotting the field six lengths at the start, trailed the field on the backstretch, made a move on the outside entering the far turn, swung four wide at the top of the stretch and drew off to win under a vigorous hand ride.”

A maiden winner doesn’t get much more impressive than Getting’up Morning, who vindicates Smith’s belief in him by overcoming a terrible start and a wide trip to win by open lengths, riveting the attention of everyone watching. In a game in which either a bad start or a bad trip is more often an excuse for losing, Gettin’up Morning displays a natural athleticism and professionalism in overcoming the sort of adversity that would have lost the race for a lesser talent. He also shows brilliant speed, not just in making his move around the turn, but in the way he powers to the front — “Like he got shot from a cannon,” in Leon’s words — with ease in response to Rosie’s excited urging.

It’s the kind of performance racetrackers and racing fans alike can’t help but thrill to, as they did in 2009 when I Want Revenge, a leading Kentucky Derby prospect that spring, won the Wood Memorial Stakes at Aqueduct despite a poor start and traffic trouble:

Find Out More
How to Watch a Race
Watching Replays

“Look at the time â€¦ 1:07 and â€¦”
Speaking of Gettin’up Morning’s speed, the six-furlong main track record at Santa Anita is 1:06.98, set by The Factor on December 26, 2010. Considering the likely fraction (time in seconds) for his first quarter of a mile, that makes the colt’s final time, given as 1:07 and change by track announcer Trevor Denman, even more breathtaking. As Escalante says of Gettin’up Morning, “That’s a freak.” (That’s a compliment on the racetrack.)

Lasix? “When he runs. Wouldn’t think you need it to breeze.”
But not all is well. As the colt cools down in the test barn following his win, Smith hears Gettin’up Morning cough. He approaches and wipes one of the horse’s nostrils, and the rag comes away stained with blood — Gettin’up Morning bled in his first race.

In North America, the majority of thoroughbred racehorses race on the diuretic Lasix (Salix), an increasingly controversial drug used to reduce exercise-induced pulmonary hemorrhage (EIPH), a condition in which small blood vessels break as a result of exertion. Horses who exhibit visible bleeding after training or racing are known as “bleeders,” and Lasix has been shown to prevent or reduce EIPH in susceptible racehorses. However, the drug is banned in almost all other countries than the US and Canada, on the rationale that Lasix disguises the very condition it treats, weakening the breed when horses are sent to stud.

In the US, Lasix is used prophylactically; it is estimated that more than 95% of American thoroughbreds race on the drug, often from the start of their careers. In this, Gettin’up Morning is unusual — Smith seems to have sent him to post without a Lasix shot, which is given approximately four hours before racing.

Veterinarian Jo (Jill Hennessy) is called to scope Gettin’up Morning’s trachea, and her news isn’t all bad for Smith. “Two-and-a-half, maybe three,” she tells the trainer, referring to the amount of blood she sees through the endoscope snaked through the colt’s nose. Bleeding is scored on a scale of 1-4, with a score of two, moderate bleeding, defined as possibly performance-affecting and a score of three, severe bleeding, as definitely performance-affecting. Gettin’up Morning won’t be able to race without Lasix in the future, but he should be able to work (“breeze”) without the drug.

Find out more
The Science of Lasix (Business of Racing)

“He’s got this big heart.”
There hasn’t been a racing sequence in “Luck” yet that hasn’t been beautifully filmed, but Gettin’up Morning’s race is shot in such a way that it captures the transcendence that occasionally graces those lucky enough to witness greatness at the racetrack. ‘Gettin’up Morning’s maiden win isn’t Secretariat’s Belmont Stakes, but it’s the kind of performance that keeps bringing people back to the track — and keeps horsemen like Smith hoping for a big horse. “He’s got this big heart,” the trainer says as he gazes at the colt in his stall, in awe of the animal’s courage.

Find out more
What Draws Us to the Track

“Have him write her a check.”
Ace (Dustin Hoffman) also has a big heart, or is that a big crush? In last week’s episode, Claire Lachay (Joan Allen) introduced herself to the cunning mobster-businessman as the director of a thoroughbred retirement program that places racehorses in the care of convicts. This week, Lachay presents Ace with a budget and details of her organization, scoring a promise of a check for at least $220,000 from Bernstein. Lachay’s group seems to be modeled on the Thoroughbred Retirement Foundation — among other activities, TRF runs prison programs, training convicts in the basics of horse care with retired thoroughbreds. TRF is just one of the many groups that work to re-train and re-home racehorses when they come to the end of their racing careers.