There are no shortage of places that do narrative recaps of HBOâ€™s Luck, but that may or may not help you understand the â€œinside baseballâ€ thatâ€™s going on with regard to horse racing. So, starting with the series premiere on January 29, weâ€™re publishing a guide to help you better understand whatâ€™s going on and/or learn more about horse racing.

“Colt’s name, Gettin’up Morning, by Delphi out of All Boats.”
Good morning! It’s another beautiful day at Santa Anita, and trainer Walter Smith (Nick Nolte) is paying an early visit to the racing secretary’s office. The time has finally come to enter his big colt in his first race, the six-furlong maiden special weight on Saturday that he pointed out to jockey agent Joey Rathburn (Richard Kind) last week. “Colt’s name, Getting’up Morning,” Smith says after carefully reading off the race conditions, “by Delphi out of All Boats. Foal’s registration on file.” Every thoroughbred in the United States and Canada must be registered by the Jockey Club, keeper of the breed’s stud book, in order to race. The late, lamented Delphi is Gettin’ Up Morning’s sire (father), All Boats his dam (mother). It seems like Delphi probably won a few big stakes races, but what of All Boats? If she were anything other than fictional, Pedigree Query would be a helpful source of information on her racing and progeny record.

â€œHe work like what you paid for him â€¦ he show he got a good mind.â€
For Turo Escalante (John Ortiz) and Gus Demetriou (Dennis Farina), the morning is eventful for another reason. Ace’s $2 million dollar Irish import Pint of Plain is working well — “Switching him leads good,” Escalante tells Gus, referring to how smoothly the horse is changing up which front foot is making first last contact on the track with every stride — when a siren sounds, indicating that a horse is running loose on the track.

“An owners worst fear, hearing the loose horse siren when when one of your best is on the track working,” Samantha Siegel of Jay Em Ess Stable tweeted as she watched this episode of “Luck.” The worst does sometime happen — a loose horse can collide with another, causing injury and even death — and there’s a flash here of disaster narrowly averted when the riderless horse comes right at Ace’s horse. Fortunately, the exercise rider (played by real life jockey Chantal Sutherland) pulls Pint of Plain up quickly and the pair safely veer out of the way.

Danger past, Escalante tells Gus that he liked what he saw out there. “He work like what you paid for him,” he says of Pint of Plain, and what’s more, by reacting to the loose horse with little panic, “he show he got a good mind.”

â€œSure as hell don’t want the rail.â€
Gettin’up Morning is entered, but what post position will he draw? “Sure as hell don’t want the rail,” Smith tells a reporter as the racing secretary randomly assigns spots in the starting gate. Poor Smith, because post #1 is exactly the stall Getting’up Morning winds up in. “The inside hasn’t been too bad the past couple of days,” Rathburn reassures the trainer, not looking entirely convinced himself.

Post position #1, aka “the rail,” isn’t always a bad stall to start from, but so much depends on the distance and the horse. In a six-furlong race, a horse breaking out of post #1 needs tactical speed to secure a good spot as the field jockeys for position in the early running. It’s easy for a horse who breaks slow or needs a few yards to gear up to get blocked in traffic or shuffled to the rear of the pack when breaking from post #1.

The inside may have other disadvantages as well, depending on track maintenance and weather. Racetracks may look flat, but all are banked around the turns and dirt tracks have a slight slope to allow for drainage. Along the rail, dirt may be deeper and more tiring for horses to run in for that reason.

“Get the double-bowed sucker for eight, feed him for three days, turn around and sell him for 27 grand.”
The Cowboy can’t help gloating as Jo (Jill Hennessy) checks out Mon Gateau for the Four Amigos. Still flush with their Pick Six winnings, Jerry, Marcus, Renzo, and Lonnie have bought the horse for $25,000 and a $7500 payoff to the Cowboy, and plan to return the animal to Escalante’s barn.

What a great deal for the Cowboy, but what a bad deal for the railbirds. Not only is Mon Gateau “double-bowed” — meaning the tendons of both his lower front legs have been injured — he was running in an $8,000 claiming race in last week’s episode, and if anything, would have most likely come back at the level he won in the race before that — a $10,000 claimer*. If they had waited, the four could probably have picked up Mon Gateau for a third of the Cowboy’s total price.

*On Twitter, pedigree analyst Sid Fernando suggested another theory explaining why the amigos paid so much for Mon Gateau.

“I break this collarbone more than I get laid.”
More bad luck for Smith. Ronnie Jenkins (Gary Stevens) is booked to ride his colt in his debut, but Ronnie gets knocked to the ground and breaks his collarbone in a race after another horse crowds his. “I break this collarbone more than I get laid,” he tells the paramedic that arrives on the scene seconds after he hit the grounds. An ambulance follows the field in every race so that there’s little delay in treating an injured rider — an ever-present reminder of how much a career on the racetrack can demand of a jockey.

Bandaged, Jenkins doesn’t waste any time taking up drinking and drugs again, which makes his fall bad luck for Rathburn too. The jockey agent still has bug boy Leon Micheaux (Tom Payne), even after he fainted coming out of the steam room, but the apprentice rider is struggling with his weight. He’s hardly alone in that. Few working jockeys maintain the 112-118 pounds they are expected to carry without relying on strict diets or resorting to sweating off pounds in a sauna. “Your brother never trained, or disciplined his eating habits,” Rathburn tells Micheaux when the rider compares himself to his brother, a former jockey now weighing 160 pounds. Micheaux seems disciplined enough — he resisted a bear claw in last week’s episode, didn’t he? — but he could stand to talk to a nutritionist. A breakfast of only orange juice would make anyone woozy.

“I bill you every month.” 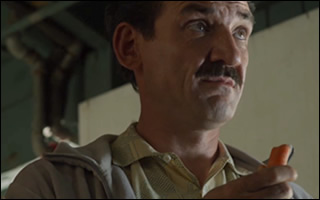 Mon Gateau, declared racing sound by veterinarian Jo, is back in Escalante’s barn, and the trainer is giving the new owners a run down of their expenses. He charges $85 a day for training, $60 a month for carrots. The blacksmith is another $125 a month, vitamins are $3. There’s also the veterinarian, acupuncturist, horse dentist, and the cost of shipping Mon Gateau to another track to race. The Four Amigos look sweetly stunned and Renzo can’t help babbling about silks and stable names. “I bill you every month,” Escalante says, all business. “You get behind, we got trouble.” It’s expensive to keep a racehorse in training, even a claiming horse, and while the purse money from wins offsets losses, few horses earn their feed.

We also have a Beginnersâ€™ Corner where you can explore and learn based on activity or topic… or feel free to ask us any questions!