There are no shortage of places that do narrative recaps of HBO’s Luck, but that may or may not help you understand the “inside baseball” that’s going on with regard to horse racing. So, starting with the series premiere on January 29, we’ll publish a guide to help you better understand what’s going on and/or learn more about horse racing, as long as HBO Go makes the next week’s episode available in advance, that is!

“He wouldn’t blow a match out now.”
What looks like the start of a race, but isn’t? Horses working from the gate in the morning, as Gettin’up Morning, trainer Walter Smith’s (Nick Nolte) big bay son of Delphi, does early in this episode.

As preparation for running in the afternoons, trainers often send horses to work from the gate so that they gain experience in breaking into a run from a standing position (and get used to other horses doing the same in close quarters). Gettin’up Morning is working in company — at least, he is when the gate opens, and a horse starts running on either side of him. The other horses can’t keep up, though, or that’s what rider Ronnie Jenkins tells another trainer when he brings his horse off the track. “Did you want me to ask him, and get him sour?,” he says, concerned that the horse would have been discouraged (“sour”) if set to chase an impossible target.

There’s no question Gettin’up Morning is tough competition in morning training. When rider Rosie (Kerry Condon) returns the horse to Smith, she reports that he stood like a gentleman in the gate and “broke great.” He also works without urging: notice that as Gettin’up Morning turns into the stretch, Rosie sits still on his back, neither urging (scrubbing her hands along his neck, or shaking the reins) nor showing him the whip. 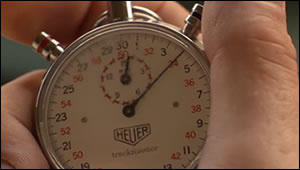 “He wouldn’t blow a match out now,” Smith observes after the workout, meaning that Gettin’up Morning wasn’t breathing hard after the exercise, a sure sign of fitness, and a very promising one, considering that Smith clocked the work in :34 seconds. “Heaven help us all,” the trainer marvels after looking at his stopwatch. On a recent morning at Santa Anita, the fastest time (called a “bullet”) posted for a three-furlong workout was :35.20. No wonder jockey agent Joey Rathburn (Richard Kind) called Smith’s colt “a [Kentucky] Derby horse,” in the first episode and maneuvers to get Ronnie named as the rider on Gettin’up Morning in his first race.

Find out more
You Better Work: A Primer on Workouts

“What’s a claiming race?”
Thank goodness for expository dialogue! Gus (Dennis Farina) isn’t just fronting as a horse owner for Ace (Dustin Hoffman). Standing in the Santa Anita paddock, watching horses leave for the racetrack, he’s fronting for viewers who might also be wondering what a claiming race is after all the talk of claims and prices in the first half of episode two. Ace’s answer — “They set a price where you can buy any horse in the race” — is pretty good, but of course, there’s more to it than that.

Claiming races make up the majority of races run in North America, with prices ranging from a few thousand dollars to more than a hundred thousand dollars. Every horse entered in a claiming race is entered at a specific price, which is determined by the race conditions — the requirements for entry issued for every race by the racing secretary at each track. (Later in the episode, when Walter Smith lines up Ronnie Jenkins to ride his horse, it’s a condition book to which he’s pointing as he talks to Joey Rathburn in the Long Shot bar.) The point of claiming conditions is to draw races filled with horses of similar quality. The price ensures — or should — that trainers don’t risk running horses of greater value against those of lesser.

Many horses, known as “claimers,” toil most of their careers in the claiming ranks, moving up and down in price as their fitness (form) and abilities change. We know, thanks to Turo Escalante (John Ortiz) affectionately referring to his horse as an “$8,000 bum,” that the claiming race in this episode is for horses valued at $8,000, which is at the lower end of the Southern California racing scale.

Find out more
Overview of Conditions

“I saw Escalante’s dropping the horse down.”
We also know, going back to the conversation among Marcus (Kevin Dunn), Renzo (Ritchie Coster), and Jerry (Jason Gedrick) at the restaurant in the morning, that this race is a step down from his previous race for Escalante’s horse, who was key to the winning Pick 6 in episode one. For that reason, Renzo wants to claim the horse. “Slickest trainer on the grounds enters his horse cheaper off the win this week â€¦ and you propose we claim him?,” says a skeptical Marcus.

In claiming races, price is a proxy for class, which is another way of identifying the level at which a horse races. A horse entered in a claiming race for a higher price than at which he last ran is rising in class; at a lower price, dropping in class. Marcus isn’t sure that claiming a horse who might be worth less this week than he was last week is a good idea, but that doesn’t stop him from betting on the horse. After all, if Escalante’s horse is sound, he outclasses his rivals. Maybe Jerry’s laconic “I saw Escalante’s dropping the horse down” reminded him that sometimes it’s handicapping the trainer that matters more than the horse — that was the angle key to their Pick 6 single last week.

“Bandages, sure, old school head fake.”
That’s veterinarian Jo’s (Jill Hennessy) reply when Escalante tells her he’s trying to pull off the class drop with his winning claimer by running the horse “with front wraps this time, scare away the vultures.” Escalante is gambling that he can win the race and keep his horse.

Horses may wear wraps, or “bandages,” around their forelegs for several reasons: The stretchy cloth wraps provide additional support to the lower leg and can help prevent soft tissue injuries. For horses who overreach with their back feet and strike the rear of their front ankles, bandages shield against nicks and cuts. Wraps can also be used to protect a recent injury or bolster an achy joint, which is just the sort of doubt Escalante is hoping to sow in the minds of anyone who might be considering claiming his horse, as Renzo and trainer Goose Mulligan (Jeffrey Woody Copland) attempt to do.

Front bandages are marked in past performances with a small “f” in the equipment column. When Goose, noticing the bright pink bandages on Escalante’s horse in Santa Anita’s saddling enclosure, remarks that the horse didn’t wear wraps the last time he ran, that’s where he’s getting the info. Bandages aren’t an announced equipment change, which is another good reason to check out horses in the paddock before placing any bets!

Find out more
A Trip to the Paddock

We also have a Beginners’ Corner where you can explore and learn based on activity or topic… or feel free to ask us any questions!