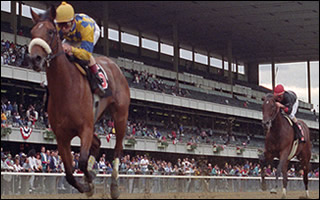 Sky Beauty was the offspring of horses who competed and won at the sport’s highest levels. Her dam, Maplejinsky, won five times from nine starts; her victories included the Alabama and the Monmouth Oaks (both Grade 1).

Her second dam, Gold Beauty, won the Fall Highweight and Test (both Grade 2) in 1982; that year, she faced older males in the Vosburgh. She finished third and was placed second through disqualification. She had been undefeated to that point, with six often-dominating wins to start her career, and that year she was named champion sprinter. At 4, Gold Beauty faced and beat males in the True North Handicap (Grade 3).

Sky Beauty’s owner, Georgia E. Hofmann, with her husband, Philip, bred both Gold Beauty and Maplejinsky. They raced the former and sold the latter as a yearling, and six years later after breeding Maplejinsky, Georgia Hofmann purchased that mare’s first foal, the filly who would be named Sky Beauty, for $355,000 at the Fasig-Tipton Saratoga yearling sale.

Sky Beauty was an extraordinary 2-year-old. She won her first start, a 5-furlong maiden special weight at Belmont on July 3, 1992, by two lengths, and in each of her subsequent four starts as a juvenile, she crossed the wire no less than 1 Â¾ lengths in front of her competition. Unfortunately, though, she didn’t end that year undefeated.

At the start of the Spinaway (G1), Sky Beauty, breaking from post 1, came out so wildly that even though the incident happened at the break, and even though Sky Beauty won by nearly two lengths, the stewards determined that her action had significantly affected the outcome of the race. Sky Beauty was disqualified and placed third.

Years later, her trainer Allen Jerkens said, “I’m surprised that they didn’t place her last.” She was, he said, “a half hour the best in that race.”

It was Smith who guided Sky Beauty to impressive wins in the three races that comprise the New York Triple Tiara; she won the Acorn, Mother Goose and Coaching Club American Oaks, all at Belmont, all Grade 1 races, by a combined 10 Â¾ lengths. When she clinched the Triple Tiara in the CCAO, Joseph Durso wrote in the New York Times:

If horse racing is searching for a superstar to energize and dramatize the business, it probably found one yesterday at Belmont Park: the dark beauty Sky Beauty, whoâ€¦scored her Olympian achievement with the mix of power and grace that makes heroes in any sport.

The road to the Alabama Stakes was not a smooth one for Sky Beauty or for her trainer, as that bit of misbehaving in the Spinaway was characteristic of the filly’s personality. “She was high strung, tough to handle,” said Jerkens. “She did a lot of things that most really good horses don’t do.”

He remembered a summer at Saratoga when he was stabled in a barn in the middle of Clare Court, in the infield of the pony track. “She ran right through the webbing of her stall,” he remembered ruefully. “She got loose.”

“Most good horses,” he said, “would eat more after they work. Sometimes she wouldn’t eat at all. She’d be nervous for such a long time. She had me worried before that race, the Alabama. Oh, God, I was dying.”

Typically humble, Jerkens recently deflected credit from himself for Sky Beauty’s accomplishments, heaping accolades on Smith and on Bob Duncan, then an assistant starter, for the filly’s win in the Alabama.

Jerkens remembered that Sky Beauty was fooling around in the starting gate, and that just as Duncan got her head straight, the gate opened. Duncan’s timing, said Jerkens, was perfect.

Though Sky Beauty usually raced close to the pace, Smith realized the quickness of the pace and held her back. When he asked her to go, she did, winning by a length and a half and inscribing her name in the history books as she joined Shuvee, Mom’s Command, and Open Mind as the only fillies to have won New York’s Filly Triple Crown and the Alabama.

Said Smith after the Alabama in the New York Times, “‘You know how much this filly means to everyone. To me, she means 10 times more.'”

Asked about the filly 18 years later, Smith’s first reaction was unequivocal. “She was brilliant,” he said.

“She was big and strong and powerful, but fairly quick for such a big mare. At one time she carried 130 pounds. It’s amazing how she carried the weight, she was so strong.”

Smith laughed when asked about Sky Beauty’s difficult personality. “The best way to get along with a woman is to let her tell you what to do,” he said. “I just went along with her.”

“We had a bond. She was really good with me.”

Back at Belmont that fall, Sky Beauty won the Grade 2 Rare Perfume, but a disappointing performance in the Breeders’ Cup Distaff at Santa Anita cost her the 3-year-old filly championship. That went to the Distaff winner, Hollywood Wildcat.

As a 4-year-old, Sky Beauty won five straight graded stakes races, four of them Grade 1’s, before faltering again in the Distaff, this time at Churchill Downs. But the Eclipse voters overlooked that loss this time, electing Sky Beauty champion handicap mare of 1994.

Sky Beauty won only one of three starts at age five, repeating her victory in the Grade 3 Vagrancy. She was retired in the summer of 1995.

An oft-repeated knock against Sky Beauty is that she was something of a homer, never winning out of New York State, and some observers think that her legacy is tarnished by her inability to win off her home turf, the reason cited by those who don’t consider her Hall of Fame material. But in 2011, after several years of skepticism, the voters this year declared her worthy, and in August she’ll join her trainer Allen Jerkens in the Hall of Fame.

Georgia Hofmann bred the first three of Sky Beauty’s foals, by Danzig, Storm Cat, and Deputy Minister. Bestyoucanbe (Danzig) and Storming Beauty (Storm Cat) each won once; the latter sold for $1.2 million as a yearling. Sky Legend (Deputy Minister) reportedly sold for $800,000 and was unraced.

In 1999, in foal to Gone West, Sky Beauty was sold for $2,850,000 to Coolmore Stud at the Keeneland November breeding stock sale. That Gone West foal is not listed among Sky Beauty’s progeny on her Pedigree Query page.

Sky Beauty’s 2002 filly by Storm Cat, Desert Tigress, raced exclusively in Ireland, with two wins in six starts and earnings of the U.S. equivalent of $12,922. She was sold in the 2005 Keeneland November breeding stock sale for $2.3 million to London Thoroughbred Services, Inc.

Portobello Road (2004) and Hurricane Cat (2003), both by Storm Cat, were Sky Beauty’s most successful progeny, but only relative to her other offspring. The former, who began his career in Ireland before moving to the New York circuit, banked $68,445; the latter raced in England, Ireland, and France and earned the U.S. equivalent of $73,640.