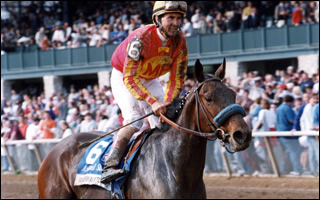 The product of a Virginia-bred mare and an Ontario-bred sire, Silverbulletday has stakes winners on both sides of her pedigree. Her sire, Silver Deputy, raced only twice at age two before an injury ended his career; he won both those starts, including the Grade 3 Swynford Stakes at Woodbine. His sire, Deputy Minister, won two Grade 1 races at 2 (the Young America and the Laurel Futurity) before going on to win the Donn and the Tom Fool at 4. The U.S. 2-year-old champion in 1981, Deputy Minister duplicated that honor in Canada, where he was also Horse of the Year.

Limited on the racetrack, Silver Deputy was prolific in the breeding shed, producing 75 stakes winners and multiple Canadian champions in addition to 2-time U.S. champion Silverbulletday.

Rokeby Rose brought stakes-winning turf pedigree to her 1996 foal, winning the Flower Bowl and placing in the Sheepshead Bay and Diana. She was 19 when she foaled Silverbulletday, repaying Foxfield’s Rob Whiteley’s faith in her. An avowed believer in the older mare, he takes credit for the Rokeby Rose — Silver Deputy pairing in this Blood-Horse article, reproduced on his website:

Whiteley also had a plan when Foxfield purchased grade II winner Rokeby Rose at the 1992 Keeneland November sale. At that time, the mare was 15 and she was barren after being covered by Red Ransom, but Whiteley believed she would be a worthwhile investment if she could be bred to Silver Deputy. Foxfield sold her first foal by that stallion, Eishin Mandan, for $145,000 at the 1995 Fasig-Tipton Kentucky July select yearling auction. The second time Rokeby Rose was bred to Silver Deputy, she produced Silverbulletday, who earned $3,093,207 and was a champion in 1998 and 1999. Foxfield sold Rokeby Rose while she was carrying Silverbulletday for $42,000 at the 1995 Fasig-Tipton Kentucky November select mixed auction.

Silverbulletday was bred by Highclere Inc. & Clear Creek and sold in the 1997 Fasig-Tipton Kentucky July yearling sale. Purchased by Michael E. Pegram for $155,000, she was a last-minute addition to his stable.

“He called me and said, ‘I can’t believe we got her for that price.’ It was love at first sight.'”

Silverbulletday quickly justified Baffert’s impulse buy, winning her first start, in July of 1998 at Churchill Downs, by 11 lengths. She followed that up with wins in the Grade 3 Debutante and Grade 2 Sorrento before suffering her first defeat, a fourth place finish in the Grade 2 Del Mar Debutante. She wouldn’t lose another race for nearly a year.

Expectations were high as Silverbulletday began her 3-year-old campaign and she picked up where she left off at 2, winning five consecutive stakes races. Dominating victories in the Grade 3 Fair Grounds Oaks in March and Grade 1 Ashland in April spurred Derby talk. Would Silverbulletday try to become the fourth filly in Derby history to wear the roses?

Pegram recalled two races in particular that made him think about running her on the first Saturday in May.

Silverbulletday won the Grade 3 Fair Grounds Oaks by three lengths, in a race that Pegram identifies as one of his favorites of her career. He remembered jockey Gary Stevens’ reaction when they came to the winner’s circle. “Wow,” said the jockey, according to Pegram.

“I asked him what he meant, and he said, ‘She hated this racetrack. She never did get a hold of it, and she absolutely hated it.'”

She never got a hold of the track. She hated it. And she won by three lengths. Wow, indeed.

Jerry Bailey was in the saddle for her next start, the Grade 1 Ashland at Keeneland, run on dirt. Back in the winner’s circle after a seven length victory, Jerry Bailey jumped off and said, according to Pegram, “If you want to run in the Derby, I’m in.”

Pegram and Baffert had won the Derby the previous year with Real Quiet, an experience that he factored in as he mulled running his prized filly against males.

“Ultimately, I didn’t really consider it,” said Pegram. “I know how hard it was to win the race, and I’ve seen how many horses have gotten burned up in the Derby. Even though I like to gamble, I wasn’t willing to take that gamble with her that year.

“When you have a gift from God, you better take care of it.”

A win in the ungraded Doubledogdare at Keeneland in April would be her lone victory at 4. In five races that year, she had one win, two seconds, a third, and a fourth. She was retired in August 2000.

Her doting owner said that she always knew how good she was, and acted accordingly. “When she was racing, everybody called her ‘the little bitch,'” he laughed. “She never had a rider that she didn’t dump.”

He recalled specifically an incident at Churchill Downs, when regular exercise rider Dana Barnes brought the then 2-year-old to the track for a final work before a race, and Pegram was there to watch. “We kept looking,” he said “and finally we saw a loose horse just standing on the track. Usually when a rider gets unseated she’s a little ticked off, but Dana came back laughing.

“‘This filly,’ she told me, ‘will do anything you want her to do—except what she doesn’t want to.’ Dana knew how smart she was.”

A year later, Silverbulletday’s diva tendencies had not abated. “She was supposed to go out and gallop a few days before the Oaks,” said Pegram, “and it started raining. We brought her out and she just stopped, as if to say, ‘Don’t you know who I am? I’m not going out there in the rain!’

“So Dana and Bobby [Baffert] turned her around, and she walked the shedrow until the rain stopped, and then she went out for her gallop.”

She has since foaled seven fillies and four colts. Five of the fillies, who are by Storm Cat, Vindication, and Midnight Lute (by Pegram’s Real Quiet, who died in 2010), haven’t made it to the races. Elusive Jackpot (2009, Elusive Quality) made five starts, her best finish a second. Illicit Affair (2010, Midnight Lute), raced four times and never got past the runner-up spot. Both fillies are owned by Pegram and were trained by Baffert. Her 2013 Misremembered colt, Political Debate, is currently racing and has won a race.

Pegram said in 2011 of the fillies’ inability to get to the races, “It’s just freaky.”

Speaking affectionately of the change in Silverbulletday’s personality in retirement, Pegram observed, “She started to become social when her career was tailing off,” he said. “Now, when I go to the farm, she’ll just come up and put her head in my arms for me to cradle it.” .

“Like any athlete in training,” he said, “racehorses when they’re competing are focused on what they’re doing. When they come here, they get to be herd animals, they get to be horses and most of them are nice to be around. With her, it’s great to see that a horse like her, supermodel-beautiful, world-class athlete, also has that emotional attachment and can be a great mother, too.”

She hasn’t forgotten who she is, though. “When Mike brings friends,” said Ramsey, “and they start taking pictures, she poses. It’s like, ‘I’m on stage again,’ and she pricks her ears and likes it. She’s a totally different animal from when she’s just on her own.”

Both Pegram and Ramsey said that she recognizes her former owner, and Ramsey suspects that her racing memories come back when she sees Pegram.

“When she sees him, she comes charging up to the fence. She’s happy to see him, and she definitely remembers him. But she might kick and wheel, too,” he added, invoking the feisty racehorse she used to be.

“It’s the same when Baffert comes here,” continued Ramsey. “She looks at him differently, as if to say, ‘Am I going back to work?'”

In 2012 Ramsey witnessed the next generation being born, when Quality Hops, Silverbulletday’s 2007 foal, had her first baby, by Midnight Lute. “It’s just a delight,” said Ramsey, “to start taking care of the second generation. It’s great to have a big-time mare and start to foal her daughters and grand-daughters. They start to be family.”

“My biggest regret,” Pegram said, “is that I never bred Silverbulletday to Real Quiet. It’s kind of funny now, that she and her offspring are being bred to Real Quiet’s son.”

Pegram didn’t express disappointment about his mare’s breeding career; he’s kept all of her fillies to try to get them to the races, and visits her in Kentucky several times a year. The man who raced champions Real Quiet, Lookin at Lucky, and Midnight Lute holds his two-time champion in special regard.