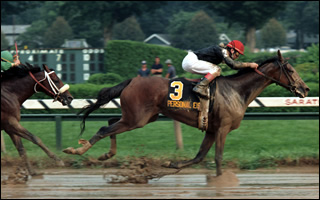 Personal Ensign was bred and owned by Ogden Phipps, whose mother, Gladys, and uncle (also named Ogden Phipps) founded the legendary Wheatley Stables in the 1920s. Phipps, the future owner of Personal Ensign, started racing under his own colors in 1932 and won his first stakes in 1935. Over the course of the twentieth century, he was among the most successful and respected owners and breeders in the country in addition to serving as an industry leader.

Personal Ensign’s pedigree can be traced back to a purchase Ogden Phipps made in 1946 of three broodmares, all daughters of the legendary French mare La Troienne, from the dispersal sale of E.R. Bradley. Her sire, Numbered Account, was out of Horse of the Year Buckpasser, whose broodmare, Busanda, won the 1950 Alabama Stakes. Busanda was out of one of the La Troienne mares (Businesslike) that Phipps purchased in 1946. Personal Ensign’s dam was Grecian Banner, the daughter of Dorine, the all-time leading money earning mare in Argentina when she retired in 1963. Ogden Phipps purchased Dorine in the late 1960s.

Personal Ensign was born at Claiborne Farm in Paris, Kentucky. The Phipps family boarded their broodmares at Claiborne through a long-standing agreement with the Hancock family. She was sent to Florida to be broken and was shipped to Keeneland in Lexington, Kentucky to start her training.

When Personal Ensign came of racing age in 1986, she was part of the first Phipps 2-year-old crop under the watch of trainer Claude “Shug” McGaughey. McGaughey, who had no family connections in the racing industry, worked his way up from the lowest ranks starting in the 1960s. In the 1970s, he landed a job with Frank Whiteley, who trained such legends as Damascus, Forego and Ruffian. In 1979, McGaughey began training his own string of horses. With a small stable of fillies in 1981, he won over half of his races in 24 starts at Oaklawn Park and had 22 wins from 99 starts overall. In 1985, he trained his first champion with Older Male Eclipse winner Vanlandingham. That same year, through the recommendation of Seth Hancock of Claiborne Farm, Ogden Phipps hired McGaughey as the trainer for his famed stable.

Phipps had uncharacteristically struggled for much of the decade of the 1980s, but the arrival of McGaughey and a mare named Personal Ensign would put the legendary Phipps name back in racing’s spotlight.

A skin disease delayed the start of Personal Ensign’s racing career. After beginning her training at Keeneland, she moved to Saratoga in the summer where she started showing great promise and made her first start at Belmont Park on September 28, 1986. After starting slowly out of the gate, she won the seven furlong maiden special weight by an easy 12 lengths. The normally conservative McGaughey, unimpressed by what he had seen in the other 2-year-old fillies that year, boldly entered her in the Grade 1 Frizette at one mile at Belmont just two weeks later. Two scratches reduced the Frizette to three starters, and Personal Ensign battled the stakes-placed Collins in the stretch and won by a head.

And then, while Personal Ensign trained for a start in the Breeders’ Cup Juvenile Fillies scheduled for Santa Anita Park, she fractured her left rear pastern and required surgery. The injury threatened her career, but the nature of the fracture made it easier to fix than a typical break. McGaughey thought she would be retired as a broodmare, but her surgeon, Dr. Larry Bramlage, believed she should be given a chance to return to racing.

After her surgery, she stayed in New York with McGaughey and began light training again in the spring. It wasn’t until she went to Saratoga to continue her rehabilitation that her trainer believed she could regain her stellar 2-year-old form.

Eleven months after winning the Frizette, Personal Ensign returned to the winner’s circle with an allowance win at Belmont Park under jockey Jerry Bailey. It would be the only time in her career that she would be ridden by anyone other than Randy Romero, who was in Chicago to ride in the Arlington Million at the time. She won another allowance race a few weeks later. She returned to stakes company with a victory in the Grade 2 Rare Perfume Stakes against 3-year-old fillies.

Personal Ensign capped her comeback from injury against the toughest competition of her career up to that point in the Beldame Stakes. Facing older fillies and mare in a stakes race for the first time, she beat a strong field of ten by two lengths. McGaughey decided to skip the Breeders’ Cup and he shipped her to Florida to begin training for a 4-year-old campaign.

It would be during her 4-year-old season that she would make her mark on racing history and complete the rarest of careers…one without a single loss.

Personal Ensign started her 4-year-old season on May 15, 1988 with a win in the Grade 1 Shuvee at Belmont Park and followed that with a win in the Grade 1 Hempstead. She now had eight wins from eight starts with all her wins coming at Belmont Park. To prove her mettle outside of New York, she was shipped to Monmouth Park in New Jersey for the G2 Molly Pitcher in July. She beat four other competitors with ease by eight lengths.

For her tenth start, McGaughey ambitiously entered her in the Whitney Stakes at Saratoga Springs against males. After she was nearly scratched because of the wet track conditions the morning of the race, Personal Ensign beat two-time Met Mile winner and future sprint champion Gulch, and New York veteran King’s Swan. King’s Swan had been beaten by 10 lengths in the 1986 Whitney by Lady’s Secret, the last female to win the race before Personal Ensign.

After the win in the Whitney that made her a perfect 10 for 10, Phipps announced that the 1988 Breeders’ Cup Distaff would be Personal Ensign’s final race. McGaughey would race her twice in preparation for the Breeders’ Cup.

Back at her home base of Belmont Park in September, Personal Ensign raced in the 1-mile Grade 1 Maskette. This time, she would face Winning Colors, the filly who won the 1988 Kentucky Derby. It was Winning Colors’ first race since a disappointing 41-length defeat to Risen Star in the Belmont Stakes.

Even without the benefit of a “rabbit,” who was entered then scratched by trainer McGaughey, Personal Ensign ran down a game Winning Colors. After the race, Winning Colors’ jockey Gary Stevens was quoted in Bill Heller’s Personal Ensign saying, “I thought she was a winner coming into the stretch…when the other mare came to her, she really dug in and really tried hard. I would have to mark this as one of [Winning Colors‘] best races.” Even with the Kentucky Derby winner at her best, Personal Ensign was better.

About a month later, Personal Ensign won her second Beldame Stakes with ease in preparation for the final race of her career at Churchill Downs in the Breeders’ Cup Distaff.

On November 5, 1988, Personal Ensign gave her best performance on racing’s biggest stage in what many believe is the greatest Breeders’ Cup race of all-time. Running over a muddy track not to her liking, Winning Colors had what appeared to be an insurmountable lead deep in the stretch, but Personal Ensign put forth one last burst in the final seconds of her career. She caught Winning Colors at the wire and won by a nose, the smallest of official margins.

Bill Heller quoted jockey Randy Romero saying after the 1988 Breeders’ Cup, “I’ve always dreamed of having an undefeated horse. I’m glad it’s over.” He would say later, “It was the happiest moment of my life…I will never forget that day.”

Personal Ensign became only the second major Thoroughbred of the century to retire undefeated — a perfect record that was matched only by Colin’s perfect fifteen race career that he concluded in 1908.

Personal Ensign returned to her birthplace at Claiborne Farm to begin her career as a broodmare for the Phipps family at the end of 1988. She furthered her legend through her progeny, producing a band of runners that have won in excess of $3.5 million. My Flag, Miner’s Mark, and Traditionally won a combined six Grade 1 races. Miner’s Mark won the Jockey Club Gold Cup and Jim Dandy Stakes. My Flag won the 1995 Breeders’ Cup Juvenile Distaff to make Personal Ensign the first Breeders’ Cup winner to foal a another Breeders’ Cup winner. The best of Personal Ensign’s progeny were trained by Shug McGaughey.

In 1993, Personal Ensign was elected to the Racing Hall of Fame and and currently has a stakes named in her honor at Saratoga Race Course.

She died as a pensioned broodmare in April 2010 at Claiborne Farms.

This horse profile is based on the work Bill Heller, Personal Ensign: Thoroughbred Legends

(Eclipse Press 2009). Heller’s book is the definitive source on the career of Personal Ensign.