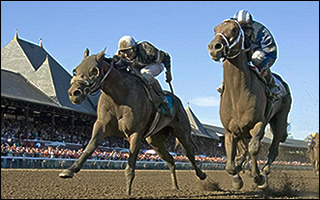 Invasor was foaled in Argentina in August 2002. His dam, Quendom, by champion miler and successful Argentinean sire Interprete, was unraced but is a full sister to a Group 1 winning mare, Reina Victoriosa, who is the dam of listed stakes winners Ready Ruler and More Than Regal. His sire, Candy Stripes, is familiar to North American racing fans as the sire of 2005 champion turf horse Leroidesanimaux (sire of 2011 Kentucky Derby winner Animal Kingdom) and as the broodmare sire of Candy Ride (sire of graded stakes winners Twirling Candy and Sidney’s Candy). Candy Stripes died of colic at the age of 25 in 2006.

Purchased as a 2-year-old and brought to Uruguay, Invasor debuted at Maronas racetrack in Montevideo, winning a 5 1/2 furlong maiden race in February 2005. He didn’t start again until August of that year, after recovering from a sesamoid fracture in his right hind ankle, winning the 7 1/2 furlong Clasico Ensayo.

Sweeping the Uruguayan Triple Crown with wins in the Polla de Potrillos in September 2005, the Gran Premio Jockey Club in October 2005, and the Gran Premio Nacional in November 2005, Invasor became a fan favorite in Uruguay, where he was named 2005 champion 3-year-old and Horse of the Year. Expected to start next in the January 2006 Gran Premio Internacional José Pedro Ramírez at Maronas, Invasor was instead bought by Sheik Hamdan bin Rashid Al Maktoum’s Shadwell Stable for a reported $1.4 million and brought to the United States, where he was placed in the barn of trainer Kiaran McLaughlin at Palm Meadows. From Florida, he was shipped to Dubai to start in the 2006 UAE Derby, in which he finished fourth, well behind winner Discreet Cat. It was the only race Invasor would lose in his career.

Returning to America, Invasor reeled off wins in five Grade 1 stakes over the next 12 months, proving his class and mettle in each. In May 2006, he took the Pimlico Special by 1 1/4 lengths at odds of 7-1. In his next start, he won the Suburban Handicap by 4 1/4 lengths in July 2006 as the 6-5 favorite. In August, he edged out Sun King to win the Whitney Handicap at Saratoga, showing heart in splitting rivals in the stretch and then digging in to get up by a nose. It was a rousing finish, and another victory despite bobbling at the start — Invasor frequently had trouble cleanly getting away from the gate. His final race of the year was the Breeders’ Cup Classic in October at Churchill Downs, in which he went to post as the 7-1 third favorite. Confronting even-money favorite Bernardini in the stretch, Invasor ran down the 3-year-old winner of the Travers and Jockey Club Gold Cup to win by one length. The victory earned Invasor honors as the 2006 champion older male and Horse of the Year.

Invasor’s 2007 campaign began in February with a start in the Donn Handicap at Gulfstream. The race was a thriller. Sent off as the 2-5 favorite, Invasor was boxed in on the rail as the field turned into the stretch and clipped heels with another runner, Barcola. Regaining his stride, he dived to the inside at the sixteenth, putting away Chatain, briefly leading, and drawing clear to win by two lengths. “How good is Invasor? He was stuck, and he wins the Donn in hand!,” exulted racecaller Larry Collmus of the performance. It was a perfect set-up for Invasor’s next race, the Dubai World Cup, which he won by wearing down pacesetter Premium Tap in a stretch duel. It was another demonstration of what made Invasor great: He may not have had flashy speed or an explosive turn of foot, but he knew how to win and showed an incredible will to do so.

Following his triumph in the 2007 Dubai World Cup, Invasor returned to McLaughlin’s New York barn and resumed training for a summer campaign. It was at Belmont Park that his career came to an end. Diagnosed with a sesamoid fracture in his right hind leg, the same limb he had injured earlier in his career, after a five furlong workout in preparation for the Suburban Handicap, Invasor was retired to stand stud at Shadwell Farm in Kentucky with a record of 11 wins from 12 starts and earnings of more than $7.8 million.