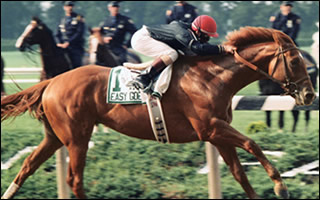 If ever a horse were bred to be a champion, it was Easy Goer; he was an Ogden Phipps homebred, the product of decades of careful breeding. His dam, Relaxing, was one of the outstanding mares the Phipps family bred over the years: she won 13 of her 21 starts, including the Delaware Handicap; she even finished in the money in the Jockey Club Gold Cup, gallant in defeat behind the great John Henry. Easy Goer’s sire, Alydar, was legendary for having finished second to Affirmed in all three Triple Crown races, but few would have predicted that Easy Goer would share so much of his father’s fate after his 2-year-old season.

His striking looks reminded fans of Secretariat, and his race record also contributed in no small way: by the time of his Champagne victory, the 2-year-old was already being compared to the ‘other’ Big Red; his second-place finish in the Breeders’ Cup Juvenile did not really bring out many doubters â€“ after all, it had been muddy, and even Secretariat lost sometimes. There was no question he would be Champion 2-year-old, and a successful Triple Crown campaign looked assured (even by horse racing standards). Easy Goer continued to turn heads as a 3-year-old â€“ his record-setting Gotham victory made him look unbeatable â€“ indeed, his mark in that race still stands as the fastest mile run by a 3-year-old on dirt, and he nearly beat Dr. Fager’s world record. Going on to win the Wood Memorial (unlike Secretariat) made a win in the Derby seem inevitable.

Enter Sunday Silence (or, depending on your point of view, the weather). The 1989 Kentucky Derby was notable for not only the beginning of a historic rivalry, but for its bizarre weather â€“ on that day, it rained, sleeted, snowed, rained a bit more, had some brief sunny moments and then returned to drizzle. I remember this very vividly because I was there â€“ but more on that in a moment. Despite the pre-race assurances that we would finally have another Triple Crown winner, Sunday Silence finished more than two lengths ahead of Easy Goer. But there was an easy excuse â€“ the mud. Easy Goer had finished second only once before, in the Juvenile (and he was clearly the better horse on that day), so the track conditions were the obvious excuse. The legion of fans Easy Goer had gained the previous year were not so ready to give the credit to his West Coast rival.

The Preakness seemed sure to be a reversal of fortune; despite his win, Sunday Silence had few believers â€“ sure, he’d won the Santa Anita Derby on his way to Kentucky, but who did he beat? Easy Goer seemed ready to turn the tables on the dark horse from California, but instead, what seemed unthinkable happened: the two horses ran neck and neck to the finish, with Sunday Silence just getting his nose in front. The rest of the field hardly mattered â€“ this was about only two horses, one of whom seemed to be reliving his sire’s history. Although the race is now regarded as one of the best that horse racing has ever seen, at the time partisans for both sides debated its merits â€“ had jockey Pat Day cost Easy Goer the race? Sunday Silence fans (now a growing contingent) likewise wondered why their horse was accorded so little respect â€“ surely, the Belmont Stakes would decide the matter.

In New York, on Easy Goer’s home turf, bettors finally picked against him; it was the firstâ€”and onlyâ€”time in his career that he did not off the post time favorite. Many were expecting Alydar’s legacy to be fully realized with another second-place finish; it seemed to be the only way this part of the story could possibly end. But Easy Goer was not his father; he went full Luke Skywalker and beat Sunday Silence by eight lengths, coming closer to Secretariat’s time than anyone had before. It was vindication for his New York fans, pure and simple. There was more to come, of course (not something a racing fan would be able to assume now) â€“ Easy Goer went on that season to win the Whitney, the Travers, the Woodward and the Jockey Club Gold Cup (when it was still run at 1 1/2 miles). He remains the only 3-year-old to have won the Whitney, the Woodward and the Jockey Club Gold Cup in the same year.

His rivalry with Sunday Silence was not over, though; they met at the end of their 3-year-old season in the Breeders’ Cup Classic, and once again, Easy Goer was favored â€“ how could he not be, based on his incredible record in between the Belmont and the Breeders’ Cup? Once again, it was as if they were the only two horses in the race â€“ and, once again, Sunday Silence finished in front, thereby nabbing 3-year-old and Horse of the Year honors. Before an injury curtailed his racing career, Easy Goer came back at four (again, imagine that today!) to win the Suburban Handicap, but he soon ended up back at his birthplace, Claiborne Farm, to begin his stud career.

Bred to champion Personal Ensign, Easy Goer sired My Flag, perhaps his best-known offspring (through whom he is still an influential broodmare sire), but his success at stud was tragically short. At age eight, Easy Goer suddenly died in his paddock, the victim of a massive allergic reaction. Only a few short years after moving into the stall once occupied by Bold Ruler and Secretariat, he was gone.

Easy Goer was inducted in the Racing Hall of Fame in 1997, and while it might be argued that, in the end, Sunday Silence could have been the better horse, Easy Goer had the best campaign. It may not have seemed quite as remarkable at the time, but in a racing universe in which it seems that the best horses retire immediately after the Triple Crown, Easy Goer’s brace of Grade 1 wins after the Belmont â€“ mostly against older horses, and including a second win at the Belmont distance â€“ is almost unthinkable today.

My own perspective on Easy Goer is somewhat skewed, although I did eventually come to embrace Sunday Silence as a great horse; Easy Goer was one of the first horses I followed obsessively, and his record at two was one of the reasons I started reading ‘hardcore’ racing publications â€“ you could call him a gateway drug. Together with a friend, we wrote songs about Easy Goer, studied his pedigree in depth and generally annoyed everyone we knew about him, beginning with his Champagne win (though to be fair, we were teenagers, so socially unacceptable behavior was the norm). We accepted him as the second coming of Secretariat and fully expected him to win the Triple Crown. When I boarded the bus to Churchill Downs (also, for the record, the first time I’d met inveterate gamblers â€“ one of the activities on the bus was betting on where the marked tire would land when the bus parked), I hoped â€“ anticipated â€“ that I would see the first leg of his Triple Crown win. Instead, I ended up cold, wet and generally disappointed; only in retrospect did I come to appreciate what I had been lucky enough to see, thanks to two of racing’s greats. Easy Goer and Sunday Silence are both missed.