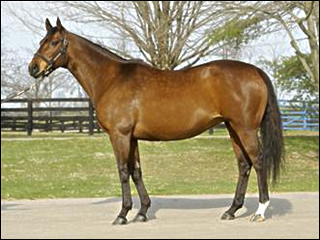 Better Than Honour is the very definition of “regally bred.” As a 2-year-old in 1981, her sire Deputy Minister was Canadian Horse of the Year, the same year he won both the Sovereign and Eclipse awards as champion juvenile male. A member of the Canadian Horse Racing Hall of Fame since 1988, he has sired (among others) Belmont Stakes winner Touch Gold and Breeders’ Cup Classic victor Awesome Again, not to mention champion fillies Go For Wand and Open Mind, both U.S. Racing Hall of Fame inductees.

The product of 1982 Broodmare of the Year Best in Show and European champion sire Blushing Groom, her dam Blush With Pride not only captured the most prestigious American race for 3-year-old fillies, the Kentucky Oaks, but also won the Grade 1 Santa Susana (now Santa Anita Oaks) and Grade 2 Ashland. As a broodmare, Blush With Pride proved prolific, with nine winners among her 15 foals, 10 of which started. However, most of her progeny were lightly raced, with relatively modest success on the track.

Among the best of her offspring was her daughter Smolensk (Danzig), who captured both the Group 2 Prix d’Astarte and Group 3 Prix de Sandringham in addition to finishing second in the Group 1 Coronation Stakes at Ascot. A younger full brother to Better Than Honour, Turnberry Isle narrowly lost the Group 2 Royal Lodge Stakes at Ascot before capturing the Irish Group 3 Juddmonte Beresford Stakes. Sent to the U.S., Turnberry Isle ran sixth in the 2000 Breeders’ Cup Juvenile, finishing less than three lengths behind the winner, Macho Uno.

In only her second start, Maryinsky (Sadler’s Wells) finished second in the Group 1 Fillies’ Mile at Ascot, and then broke her maiden next out. Unfortunately, she didn’t maintain her form into her 3-year-old campaign, running unplaced in six starts, four at the Group 1 level. However, as a broodmare, Maryinsky produced French Group 1 Criterium International winner Thewayyouare (Kingmambo), as well as European co-champion 3-year-old filly Peeping Fawn (Danehill) who, after finishing second, a mere half-length back, in the Group 1 English Oaks, reeled off four consecutive Group 1 wins, including both the Irish and Yorkshire Oaks over 12 furlongs.

Among Blush With Pride’s unraced progeny is Desert God (Fappiano) who, as a sire in New Mexico, produced the undefeated Pepper’s Pride, co-holder (along with Zenyatta) of the modern-day record for consecutive wins in North America at 19 races.

When Blush With Pride was 17, she gave birth to a bay filly, later named Better Than Honour. Bred by Carl Icahn’s Foxfield, she was placed in the 1997 Keeneland July select yearling sale where she sold for $750,000 to Robert K. Waxman. She was sent to trainer John Kimmel who handled her for her entire racing career.

Jockey Richard Migliore, who worked with Better Than Honour as a baby and rode her during each of her eight lifetime starts, recalls that she possessed a beautiful temperament. Physically soft and feminine, she always carried herself like a lady, well-behaved and sensible, lacking any quirks or instabilities. On the track, she was focused, yet didn’t necessarily strike one as a filly who imposed her will on others, dominating her competition. She had talent, though, and like so many promising 2-year-olds, Better Than Honour debuted at Saratoga, in a maiden special weight race going 6 1/2 furlongs on August 12, 1998. Sent off as the clear even-money favorite under Migliore, she finished second, less than a length behind Oh What a Windfall, an Odgen Phipps filly who later won the Grade 1 Matron at Belmont and Grade 3 Tempted at Aqueduct. Her connections weren’t disappointed, as they knew she would be better stretching out further.

At even shorter odds, Better Than Honour entered her second race on September — and again was upset, this time by longshot Waltz On By over a muddy Saratoga track. Again, the distance probably hampered her, although when racing moved to Belmont, she was again upset over a sloppy track, this time finishing third going six furlongs on October 9. The winner, La Ville Rouge, finished second next out in the Grade 3 Tempted, but is perhaps better remembered today as the dam of Kentucky Derby winner Barbaro.

Stretching out for the first time to one mile, Better Than Honour finally broke her maiden on October 29 at Aqueduct, wiring the field while pulling away to win by over five lengths. Off of that effort, she entered the 9-furlong Grade 2 Demoiselle on November 28, finishing second by a nose to Tutorial, but with Tutorial disqualified and placed fifth for interference in the stretch, Better Than Honour became a graded-stakes winner. Talking about it recently, Migliore still believes she was clearly the best that day.

In her 3-year-old debut, Better Than Honour finished second to Madison’s Charm in the 8-furlong Grade 3 Comely at Aqueduct on April 24. Next out, in the June 4 Grade 1 Acorn, Better Than Honour turned the tables on Madison’s Charm, but couldn’t quite defeat Three Ring, winner of both the Grade 2 Davona Dale and Bonnie Miss, and a filly whose previous outing had been (after a poor start and slipped saddle) a last place finish in the Kentucky Derby. The Acorn outcome was not without controversy, as Migliore’s claim of foul against the winner was disallowed, and, in a situation in which he now admits he let his emotions get the best of him, he vocally and publicly expressed his frustration that the three New York stewards had displayed habitual inconsistencies in their rulings in the period leading up to the race.

Thus, during the time leading up to what would be her final career start, Migliore built up the rivalry with Three Ring, firmly believing that his filly would find redemption for the bumping and head-bob loss in the Acorn. Tragically, Three Ring reared up in the paddock before the Grade 1 Mother Goose, flipping over and cracking her skull. She was immediately euthanized, casting a pall over the subsequent race, in which Better Than Honour finished third, over nine lengths back of Kentucky Oaks runner-up Dreams Gallore and nearly two lengths back of her old nemesis Oh What a Windfall.

Migliore recalls that, after that race, Better Than Honour suffered a minor ankle problem, not serious enough on its own to merit retirement. However, due to financial difficulties, her owner Robert K. Waxman dispersed his stable at that November’s Fasig-Tipton sale where Better Than Honour was purchased by John G. Sikura’s Hill ‘n’ Dale Farm, never to race again.

Her first breeding was to Storm Cat and, on January 21, 2001, she foaled a bay filly, Teeming who, as a weanling, sold for $1.5 million at auction. Although she only raced four times (all as a 4-year-old), Teeming won three times, including breaking her maiden second-out at Woodbine going 6 furlongsâ€”by 11 1/2 lengths! As a broodmare, Teeming has produced juvenile stakes winners Cascading (A.P. Indy) winner of the 2009 Glorious Song Stakes and Streaming (Smart Strike) winner of the 2013 Grade 1 Hollywood Starlet.

Sold privately to Stanley and Marcia Gumberg’s Skara Glen Stables in 2001, Better Than Honour produced her second foal in 2002, Magnificent Honour (A.P. Indy), who never raced; with only a modest produce record to recommend her and in foal to Giant’s Causeway, Magnificent Honour sold at the 2012 Keeneland January Horses of All Ages sale for $600,000. The Gumbergs hit the proverbial breeding jackpot, however, when Better Than Honour next produced back-to-back Belmont Stakes winners Jazil (Seeking The Gold) and Rags to Riches (A.P. Indy).

A $750,000 yearling Keeneland purchase, Jazil was trained by Kiaran McLaughlin for Sheikh Hamdan bin Rashid Al Maktoum’s Shadwell Racing. Runner-up in the Grade 1 Wood Memorial, Jazil finished in a dead heat with Brother Derek for fourth place behind Barbaro in the Kentucky Derby. Skipping the Preakness, he next captured the Belmont by 1 1/4 lengths over Bluegrass Cat.

In September 2005, Rags to Riches was purchased for $1.9 million by Englishmen Michael Tabor and Derrick Smith and sent to trainer Todd Pletcher. She made one start at age two, a distant fourth-place finish going 5 1/2 furlongs on June 10 at Churchill. Her 3-year-old debut on January 7 at Santa Anita resulted in a devastating 6-length victory with jockey Garrett Gomez aboard. After that, she captured three consecutive Grade 1 racesâ€”the Las Virgenes, Santa Anita Oaks, and Kentucky Oaksâ€”before the decision was made to contest a talented field of males in the Belmont Stakes. Because he had committed to riding Hard Spun, Garrett Gomez was replaced by John Velazquez. In a race that will go down in history as one of the most dynamic ever, the big chestnut filly battled Preakness winner Curlin down the stretch, defeating the future two-time Horse of the Year by a head. She only raced once after that, a half-length loss to Lear’s Princess in the Grade 1 Gazelle that September. As a broodmare, she has produced an unraced 2009 Giant’s Causeway filly Opulence; and a still-unnamed 2010 Henrythenavigator colt. Her 2011 Galileo colt, Auguste Rodin, is in training in France with Andre Fabre; she also birthed a Galileo colt in 2012

Pregnant with Casino Drive (Mineshaft), Better Than Honour sold for $2 million at the November 2004 Keeneland breeding stock sale to Coolmore Stud and Michael Tabor, and was sent to Ireland. However, after Jazil’s Belmont win, she was privately purchased back by Southern Equine and Hill ‘n’ Dale, with the former holding a 70% ownership share, and Hill ‘n’ Dale owning 30%. When the two entities dispersed their joint holdings at the 2008 Fasig-Tipton Kentucky November select mixed sale, Southern Equine bought her outright for a broodmare world-record $14 million.

With Casino Drive, it certainly appeared that Better Than Honour had a legitimate shot at her third Belmont winner. Purchased as a yearling for $950,000 by Hidetoshi Yamamoto, Casino Drive’s Japanese owner brought him to the U.S. off his maiden victory at Kyotoâ€”and the chestnut colt easily captured the Grade 2 Peter Pan by nearly six lengths. Unfortunately, a foot injury kept him out of the Belmont, but later that October he won an allowance race during the Oak Tree meeting at Santa Anita, before finished dead last in the Breeders’ Cup Classic. After nearly two years off, Casino Drive is racing again in Japan in 2011.

Better Than Honour‘s 2006 colt by Giant’s Causeway, Man of Iron, began his racing career in Ireland, breaking his maiden at age 3. Unplaced in two previous group races, he traveled to Santa Anita to capture the 2009 Breeders’ Cup Marathon by a nose over gallant 9-year-old Cloudy’s Knight. He hasn’t won since, being pulled up in his last race at Meydan in January 2011 and entered in the July Tattersalls sale as horse a in training.

Bred back to Giant’s Causeway, Better Than Honour had a colt in 2007, Arco Felice, who failed to win or place in seven European races, four of which were over hurdles, before he was retired in 2011. Unfortunately, Better Than Honour aborted a full brother to Rags to Riches in February 2008, and failed to conceive when bred to Distorted Humor that May. Thus, she was not in foal when sold in November 2008, but in 2010 she produced a filly by Street Cry, named Better Not Cry who made her race debut in May 2013 as a 3-year-old. She also has a 2011 filly named Tiffany’s Honour by Street Cry that will maker debut at Hollywood Park on the turf on December 14, 2013. After not being mated for 2012, she produced a Bernardini filly in 2013.