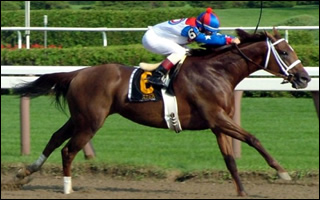 Azeri’s beginnings didn’t exactly augur history-making success: her owner and breeder, Allen Paulson, put her in the September Keeneland yearling sale in 1999. Characterized as an “obvious standout” on the Saturday that she went through the ring, Azeri is listed in the sale records as having been sold for $110,000 to Heatherway, Inc.

In fact, Azeri was a buy-back that day: acting as agent, Heatherway purchased her when her reserve wasn’t met, and she went back to Allen Paulson, in whose name she would race for the rest of her career.

Paulson was a pilot, and he owned and ran a number of aviation businesses; he named his filly after an aviation checkpoint in Baku, the capital of Azerbaijan. He died in 2000, before he ever got to see her run, and his son, Michael, took over her career.

Craig Harzmann writes at length about Azeri’s pre-racing life in Women of the Year: Ten Fillies Who Achieved Horse Racing’s Highest Honor. The chestnut filly didn’t, according to Harzmann, turn many heads as a youngster; he quotes Azeri’s first trainer, Laura de Seroux, as saying, “‘She’s no beauty,'” and writes that the filly “didn’t make much” of an impression on her new trainer — until de Seroux saw her run for the first time, in training in August of 2001. Two months later, Azeri ran – and won – her first race.

Azeri is by Jade Hunter (Mr. Prospector), who was owned by Bruce McNall and Allen Paulson. Winner of six races from 14 starts, Jade Hunter counts among his victories the Grade 1 Gulfstream Park Handicap and Grade 1 Donn. He stood at stud in Kentucky, where Azeri was bred, in New York, and in Japan before retiring to Old Friends equine retirement facility in 2009. He died there from complications from colic in January 2011 at the age of 27.

Azeri made her first start on November 1, 2001, late in her 3-year-old year, in the first race at Santa Anita; she immediately declared herself a racing force, winning by six lengths under Mike Smith, who rode her for 18 of her 24 lifetime starts. Proving that that maiden win was no fluke, Azeri won each of her next two starts by three lengths before finishing second in her first stakes attempt, the Grade 2 La Canada. It would be the last time for more than a year that another horse would cross the wire in front of her.

Between March 10, 2002 and August 10, 2003, Azeri won 11 straight races: eight of them were Grade 1’s, three were Grade 2’s. She won the Vanity, the Apple Blossom, the Milady Breeders’ Cup Handicap, and the Clement Hirsch twice in that span; after being defeated in the Lady’s Secret in September of 2003 (she finished third and was placed second through disqualification), she came back in 2004 and won the Apple Blossom for the third year in a row. Her victories came over five different tracks, and her record of eight wins and a second in nine starts in 2002 earned her Horse of the Year honors, despite her not having raced against, much less beaten, males.

Following her extraordinary undefeated streak, Azeri’s racing career hit a fit of unevenness: she failed to hit the board for the first time in her career when, as a 6-year-old, she raced against males for the first time in the Met Mile at Belmont, finishing eighth. In her first three years on the track, she’d never been worse than second; in 2004, she finished out of the money three times: the Met Mile, the Ogden Phipps, and the Breeders’ Cup Classic.

Azeri raced for trainer Laura De Seroux for her first 16 starts, of which the duo won 14; transferred to D. Wayne Lukas before her 2004 campaign, Azeri raced eight times for him, with a record of 3-2-0.

Azeri retired in 2004 and was bred by the Allen E. Paulsen Living Trust to A.P. Indy in 2006, foaling a chestnut colt. First named Vallenzeri (perhaps because he was born on February 14?), he followed in his mother’s footsteps when he became a celebrated buy-back in the Keeneland yearling sale in September of 2008; though the bidding reached $7.7 million, the colt failed to meet his reserve and was later sold to Kaleem Shah for $1.9 million in the April 2009 2-year-olds in training sale at Keeneland.

Vallenzeri’s name was changed to Take Control, and the colt races for Bob Baffert. He broke his maiden at first asking in December of 2009 at Santa Anita and returned to the races in 2012 with an allowance win and forth place in the Grade 2 San Diego Stakes at Del Mar. He was going to race in the 2012 Pacific Classic, but was declared out of contention and taken out of racing and training. He made a return to the track in the 2013 Grade 1 Awesome Again Stakes at Santa Anita, where he finished last. Sadly, he was euthanized after a training accident in October of 2013.

In 2008, Azeri foaled a chestnut filly by Giant’s Causeway; purchased by Robert and Lowana Low for $800,000 at Keeneland in April of 2009, Arienza made her debut stylishly on March 6 at Oaklawn Park, winning easily by 2 1/2 lengths for trainer Dan Peitz. She made it 2-2 under a handride on March 27, 2011 at Oaklawn Park, but after going winless in four subsequent starts, Arienza was retired in the spring of 2012. The Daily Racing Form reported that she would be bred to Tapit.

Azeri’s 2009 foal was a Ghostzapper filly named Wine Princess who sold for $475,000 at Keeneland in 2010; she was purchased by Jimmy and Becky Winemiller. The winner of the 2012 Grade 3 Monmouth Oaks and 2013 Grade 2 Falls City Handicap was retired to Hill and Dale Farm after her Fall City Handicap win and will be bred in 2014.

In January 2009, Azeri herself went back into the sales ring at Keeneland, and she once again failed to meet her reserve when the bidding stopped at $4.4 million. Ten months later, she was sold for $2.25 million to Katsumi Yoshida; she is at his Northern Farm in Japan. And more recently her two colts by Deep impact were the top sellers in Japan, one in 2013 and the other in 2014.