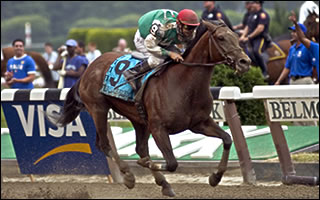 Afleet Alex was sired by Northern Afleet from the prominent Raise a Native sire line. Northern Afleet had five career wins from 21 starts, including three graded stakes wins in California at distances from seven furlongs to 1 ½ miles. He was Grade 1 placed in the Malibu Stakes at Santa Anita and the Met Mile at Belmont Park. Afleet Alex’s dam, Maggy Hawk, was out of the sire Hawkster, who earned $1.5 million during his career with three Grade 1 stakes wins. He also set the world record for 12 furlongs at Santa Anita.

Afleet Alex was the most successful horse born to the breeding operation of John Silvertrand. Silvertrand’s family developed and owned Southwell Race Course in his native Britain. Prior to moving to the United States in 1990, he served in the Royal Air Force and was the personal pilot for the rock group Fleetwood Mac. When Afleet Alex was born in 2002 on Silvertrand’s farm in Florida, his dam, Maggy Hawk, was unable to produce milk, a condition that severely hinders the chances that a foal will survive. Silvertrand’s daughter, Lauren, fed the new foal by hand until a nurse mare could be found.

Afleet Alex’s trainer, Tim Ritchey, told the early history of the future champion to Steve Haskin in 2005: “Mr. Silvertrand lost the horse on a coin toss following a foal-sharing agreement…He was considered an ugly duckling, and the person who won the toss (John Devers) sold him privately for $150,000 (to Joseph Allen). They broke him and put him into training, but the same advisers who told (Allen) to buy him, told him to get rid of him. So, he was consigned to the Fasig-Tipton Timonium sale as a 2-year-old.”

Cash Is King Stable purchased Afleet Alex from the 2-year-old sale. Cash Is King was then a brand new partnership whose members were from the Philadelphia and Delaware Valley area. In early 2004, the head of the stable, Chuck Zacney, asked Tim Ritchey to buy and train a horse for Cash Is King. Ritchey made the first purchase for Cash Is King for $75,000 at the Timonium sale in April 2004. That colt turned out to be Afleet Alex.

Afleet Alex won his first two starts by a combined 23 ¼ lengths at Delaware Park. From there, he was pointed to graded stakes.

Afleet Alex made his stakes debut on one of the toughest circuits for 2-year-olds, at Saratoga Springs in New York. He won the Sanford in stakes record time and offers reportedly as high as $2 million followed. Cash Is King had no intention of selling and turned down all offers. Afleet Alex followed his Sanford with a win in the Hopeful, also at Saratoga. Afleet Alex closed his 2-year-old season with two close second place finishes in the Champagne at Belmont Park and the Breeders’ Cup Juvenile.

Tim Ritchey wintered his colt at Oaklawn Park. He planned on following the same road as the previous year’s Kentucky Derby winner Smarty Jones, who swept the Derby preps at Oaklawn prior to his Triple Crown success. Afleet Alex made his sophomore debut with an easy win in the 6-furlong Mountain Valley Stakes. Two weeks later, he finished a disappointing last in the Rebel Stakes. It was discovered after the race that he had a lung infection. His jockey for the Rebel, John Velazquez, riding him for the first time, decided not to stay on as his rider after Alex’s Rebel performance. For the Arkansas Derby, Ritchey and Cash is King decided to reunite their horse with Jeremy Rose, who had been aboard Afleet Alex for all of his big races. The colt returned to form in the Arkansas Derby, winning impressively and placing himself among the favorites for the Kentucky Derby.

Afleet Alex was sent off as the second choice behind Bellamy Road in the 2005 Kentucky Derby. He was among three horses in deep stretch whose nose touched the lead, but he could only manage a third-place finish behind longshot winner Giacomo and even longer shot Closing Argument. Afleet Alex’s next race came in the Preakness at Pimlico, just a few miles from the Timonium sales pavilion where he was purchased by Ritchey and Cash Is King. The second leg of the Triple Crown for Afleet Alex is the race all remember when recalling his career.

In the Preakness, after angling his colt to the rail at the start, Jeremy Rose kept Afleet Alex well behind the pace. He made a bold move around the second turn while circling much of the field. When he was about to pass pacesetter Scrappy T at the head of the stretch, Scrappy T veered out directly in the path of the fast-moving Afleet Alex. Afleet Alex stumbled and nearly fell but miraculously recovered, regained his feet, and won going away.

The Belmont Stakes would be the final chapter in a stellar, albeit brief, career for Afleet Alex. He won the 1 ½ miles Belmont by seven lengths, beating the Kentucky Derby winner, Giacomo, as he did in the Preakness. He became the 11th horse to win the Preakness and the Belmont after losing the Kentucky Derby. After the race, jockey Jeremy Rose told the New York Times, “He should be a Triple Crown winner, but I messed up….You can’t blame Tim, and you can’t blame Afleet Alex…So if you have to blame someone, blame me. I don’t want to hear any more criticism of my horse. Knock me, but don’t knock him, He’s one of the best we’ll see in a long time.” (New York Times, 12 June 2005)

After the Belmont, Ritchey intended to take Afleet Alex back to Saratoga and point to the Travers Stakes. However, in late July, Ritchey announced that his colt had undergone surgery to repair a small fracture. Even with this setback, Cash is King hoped for a return in the fall with a goal of running in the Breeders’ Cup. In October, Afleet Alex’s fracture had not fully healed. In December, when a test revealed a degeneration of bone in his fractured leg, a condition that increased the possibility of another break, Afleet Alex was retired to stud.