While it may seem like a no-brainer, there’s a definite skill involved in watching a race. Fortunately for me, the first book I read about racing was “Betting Thoroughbreds for the 21st Century: A Professional’s Guide for the Horseplayers

” by Steve Davidowitz. On pages 4-8 of the first chapter he discusses the importance of seeing as much of the race as possible and the finer points of how to watch a race. After laying out some how-tos, he offers these words of encouragement:

After some practice you will find yourself using your race-watching skills automatically, making astute observations that others will miss. Believe me, no other racetrack skill will ever be more useful.
– Steve Davidowitz

Much of his instructive passage is geared towards an on-the-track experience and using binoculars, but there are pointers that can be used to your advantage in any situation.

Unfocus your eyes and look for movement
This will help you identify horses on the move, either forwards or backwards! This technique helped me see that Mine That Bird was making a monster move coming out of the backstretch while others, including the announcer(!), didn’t see him until he was sneaking by the rest of the pack on the rail. Noticing when a horse makes their move can also tell you a lot about their running style and under what conditions they’re likely to run their best moving forward.

DON’T just watch your horse
Obviously this is a natural tendency when watching a race in real time, but you don’t want to end up having to ask yourself “What happened?” if several other horses pass yours right before the wire when you thought your horse had it all wrapped up.

Keep looking around the pack, not just at the front
Another tendency, particularly when watching on TV or a computer, is to watch the front of the pack. Many tracks broadcast their races with a split screen providing a close-up shot of the front of the pack and wider shot of the entire pack. While it can certainly be spellbinding to watch a couple of front runners duke it out, keeping your eyes moving around the entire pack will help you catch anyone making a move. 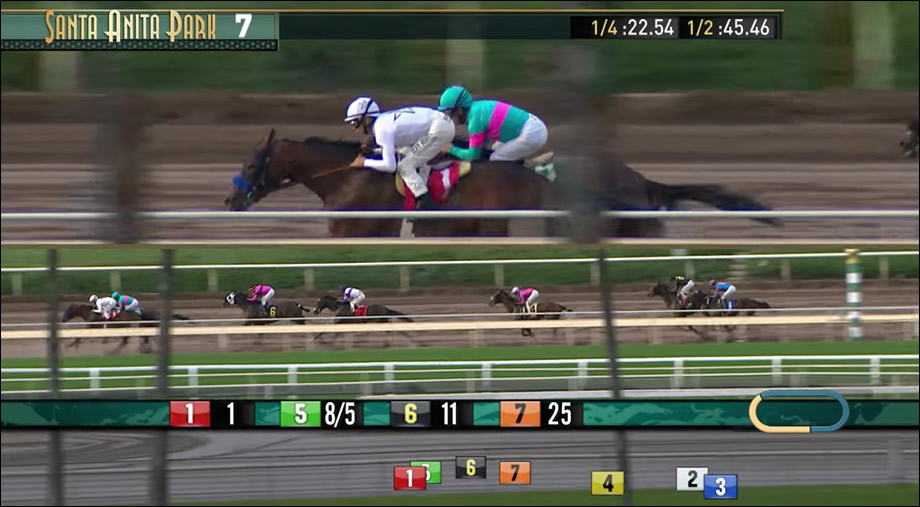 Don’t get caught up in the hype
Another common scenario is that all eyes are on the big favorite for a race, and if that horse fails to make it happen, you’ll miss the real action. For example, in the 2008 Belmont Stakes, everyone (myself included) was so busy watching Big Brown going in to the turn that we all missed Da’ Tara wiring the field. By getting caught up in the hype, you’ll miss the real story.

Pay special attention to the turn
Davidowitz points out that on the turn into the stretch is the place “the majority of races are won or lost”, for a variety of factors. He specifically speaks at length about what you can learn from watching the decisions a jockey makes about how and where to position the horse. Some tracks have a longer stretch than others. For instance Fair Grounds in New Orleans has one of the longest stretches, so a horse that seems in trouble coming into the stretch there might be able to recover by the wire. Oaklawn in Hot Springs Arkansas on the other hand has a very short stretch, so in the same scenario a horse might run out of room.

Try to note the helmet color and silk color
Like catching a peak at the saddle cloth color, sometimes the only thing you can really make out in a pack of horses is the helmet color. Of course this doesn’t help if they all have white helmets! Another place you can look to determine who’s who is the upper arms of the jockeys as they wear arm bands that display their number.

Practice makes perfect. Don’t be hard on yourself if you don’t catch things during the race, it’s not easy! You can always go back and watch replays. And if you find yourself confused about what the announcer is saying, be sure to check out “Understanding Race Calls” for a list of commonly used phrases used during races!