Shop Around!
Do what your mama told ya
By Adam Wiener, Hello Race Fans Co-founder

Hey, try to get yourself a bargain son
Don’t be sold on the very first one
My mama told me
You better shop around

The lesson preached in the classic Motown hit “Shop Around” can easily be applied to picking a horse. I learned that the hard way.

On the 2007 Kentucky Derby trail Hard Spun was the even money favorite in his 3-year old debut in the Grade 3 Lecomte Stakes. While I often seek value with longer odds, he looked so far superior to the other horses in the parade that it was tough to bet against him. So, I didn’t.

As he came down the stretch, pulling away from Teuflesberg, cupid showed up, and shot me with his arrow. This was January and we still had three more months of Derby prep races featuring dozens of other horses. It didn’t matter. My mind was made up, I had my Derby horse.

After his affable, charismatic trainer, Larry Jones, explained how Hard Spun had a “fast cruising speed,” I was certain he was going to win the Kentucky Derby. No other horse could catch him! He would hold off the stalkers, while the closers would be caught in the heavy traffic of the 20-horse field. At 10-1 odds on Derby day, he was a gift from the wagering gods.

I bet heavy. Well, “heavy” for me. I wagered well over $100 in exotics â€“ Exactas and Trifectas â€“ all with Hard Spun on top. I was so confident that I did the unthinkable: I singled a win bet on him for $100.

The gate opened and Hard Spun got right to the lead. It was a lock! Imagine my excitement at the top of the stretch.

Street Sense was the juvenile champion the prior year and had, just like Hard Spun, won his 3-year old debut. He had a good prep season and entered the Derby as the favorite. He avoided the traffic and got through on the rail. Why did I factor him out?

It’s OK to fall in love with a horse, but my “woulda, coulda, shoulda” is a reminder never to let that love blind you to other possibilities.

Later that year, while I may have still loved Hard Spun, I bet Curlin to win the Breeders’ Cup Classic. I was not making that same mistake again.

I recommend you bookmark this page. If you ever think you’re falling in love with a horse, just come back here and take a glance at my losing Kentucky Derby win bet: 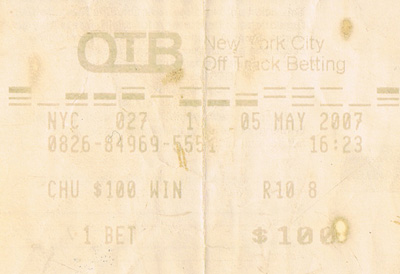