“Luck” was always about the horses. How fitting that the final image of the show isn’t of Turo, or Rosie, or Jerry, or any of the other people whose lives orbit the racetrack, but of Pint of Plain standing peacefully in his stall in a darkened barn after a momentous day. He’s beautiful, mysterious, a winner — not unlike “Luck” itself, in its singular season.

Pint of Plain may be a little unsettled when Gus (Dennis Farina) and Ace (Dustin Hoffman) arrive at the barn — horses know their routines, the trainer tells the pair — but Escalante is definitely distracted by his concern for the pregnant veterinarian, who’s been at risk of miscarriage since she suffered a kick to the belly in an earlier episode. (Perhaps that’s why Escalante doesn’t dress up for the Western Derby that afternoon? Trainers usually put on suits for $1 million purses.)

One of the pleasures of “Luck” has been how well the series has depicted the backstretch, and that includes showing the animals — such as ponies, goats, and chickens — that many barns keep as companions for horses. (Cats, too, as much for their mousing as their company.) Companion animals aren’t just for staying at home, either. Seabiscuit had a dog named Pocatell and a spider monkey named Jo-Jo that accompanied him, and Smarty Jones traveled the 2004 Triple Crown trail with a pony named Butterscotch. Goats have been companions to racehorses for hundreds of years, and remain popular barn pets. In 2011, Oak Leaf winner Weemissfrankie traveled with her goat, Pickles, to the Breeders’ Cup at Churchill Downs.

“Although, to go by the odds, you’re outclassed in this race too.”
Before the Western Derby comes the South Bay Handicap, and the Forays are in their best to watch (and wager on) Mon Gateau. Marcus (Kevin Dunn) has invited his doctor; Renzo (Richie Coster) his mother (Mercedes Ruehl). Left alone with the crankiest Foray, mom observes that Mon Gateau is getting overlooked on the tote board, probably because he is making a pretty big class leap going from claiming races to overnight stakes in just three starts.

But what a race Mon Gateau runs! The racing sequences have been some of the best scenes in the series, and the two races that make up this episode are exquisitely shot and thrilling to watch. What this episode also really nails is the excitement of a marquee race day — the crowd, the cheers, the joy of watching your horse win. When early reviewers complained about the seediness of the racetrack scene — and particularly of the gambling foursome — they missed that these guys were the emotional heart of “Luck.” Watching Mon Gateau, we’re rooting as much for the horse as we are for the Forays and their incredible winning streak.

“The Derby is only for 3-year-olds.”
It’s not just class keeping Mon Gateau out of the Derby. As Marcus tells Dr. Khan (Shaun Toub) later, when he asks why the Forays didn’t run Mon Gateau in the $1 million race, “You run your horse where it fits,” and the Western Derby is restricted to 3-year-olds. Mon Gateau is a 5-year-old. It’s never spelled out in “Luck” (unless you count the elliptical conversation between Escalante and Walter Smith in the test barn), but the Western Derby is clearly a prep for the Kentucky Derby, the one race everyone in the game wants to win, and the likely next stop for horses as good as Pint of Plain and Gettin’up Morning.

Find out more
Getting Lucky in Kentucky
Derby Prep Alert

“They put on a good damn show.”
They’re likely for Kentucky on the first Saturday in May because Pint of Plain and Gettin’up Morning don’t just finish one-two in the Western Derby (earning more than enough graded stakes money for a spot in the Kentucky Derby starting gate), they finish in a photo so close that neither Escalante nor Smith (Nick Nolte) are willing to declare victory before the track announcer calls the race official. It’s a head bob that puts Pint of Plain in front after a stretch duel with Gettin’up Morning; the results could have gone the other way just as easily.

Good stretch duels and photo finishes make for some of the most memorable races. In 2007, the filly Rags to Riches earned a spot in racing history battling Curlin down the Belmont stretch to win the Belmont Stakes by a nose. In 2010, Zenyatta’s flawless career came to an end when Blame narrowly beat her in the Breeders’ Cup Classic. And in 2011, the rivalry between Blind Luck and Havre de Grace reached its high point in the Delaware Handicap, when Blind Luck, repelled twice by Havre de Grace, edged ahead at the wire.

“We had all the gimmicks, correct?”
The Forays have a very good day at the betting windows. They keyed Mon Gateau in several wagers, including a Pick 4, doubles, and other multi-race exotics, playing their horse with Ace’s Irish import. Their winnings come to $417,000, or more than $104,000 apiece. Celebrating back at the motel, Marcus tells his friends, “In the long run, the story is, we all go broke.” He’s joking, in his way, playing on the old saying, “all horseplayers die broke.” Damon Runyon is credited with the phrase, “But Runyon always insisted that the author of the mournful truism was a friend of his: a gambler named E. Phocion Howard, who died broke himself to prove his point.”

Exotic bets, bets which go beyond the standard win, place and show, are commonly referred to as gimmicks by horseplayers. The Forays list almost every type of gimmick when they’re constructing their wagers. Here’s a full list and explanation of common wagers (some tracks have proprietary wagers). We also have several articles listed below to help you play like a Foray.

“As long as they come out and see it.”
You know Ace’s nemesis Michael Smythe (Michael Gambon) is irredeemably bad when he says, gazing out over Santa Anita from the windows of the turf club, that he wants to bulldoze the place and build tract housing. He can’t see the beauty. 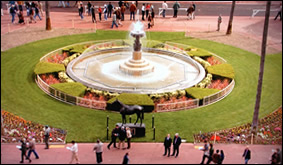 Ace may dream of taking revenge on Smythe for his far worse crimes, but his hopes are tied up in buying Santa Anita and a life with horses at the center. Ace wants others to experience the peace he feels at the track. “The first thing we’re gonna do when we own this place,” he tells Gus, “is once a month, we give a horse away.” There’ll be a drawing, and Ace will pay the upkeep — all he asks is that the winners come out and see the horse. It’s a lovely idea.